During scorching summers, paleteros, the Spanish term for a street vendor selling ice cream, bring cool relief to the delight of sweat-drenched Houstonians. The legion of dedicated pedalers not only have to endure high temperatures as they hand out treats in some of Houston’s most dangerous neighborhoods, they are targets for criminals that pose as customers.

“It’s a risky job like all jobs, but an honest job. Except now, I don’t sell as much because now I have kids and if something happens to me, I don’t know,” said Julio Garcia, a paletero of more than 10 years.

Garcia’s name has been changed. He doesn’t have proper documentation and permits to operate the street cart legally in Houston.

“It’s hard sometimes. It’s dangerous and there are no real advantages to this job,” said Garcia, a father of three children.

Crime statistics from the Houston Police Department indicate there were 26 aggravated assaults and 25 robberies from May to July of this year in the Moody Park area that Garcia works.

The children around the park playgrounds flock to Garcia but do not know his name, they simply refer to him as “El Paletero”.

“When I hear that song, I know he’s coming. I always ask grandma for a dollar because she never says no to me,” said Jay, an 11-year-old boy that lives in an apartment complex near Moody Park.

If the ice-cream truck fails to come by or if Jay misses the truck, he calls his friends and they all walk over to Moody Park located on Fulton street to El Paletero.

According to the City of Houston Health and Human services website, push carts and ice cream tricycles require an additional permit from the Parks and Recreation Department for paleteros to sell frozen desserts at a local park.

Ten years ago, Garcia’s uncle sold him the paletero cart with the ice-cream freezer for about $500. According to Garcia, carts can be as low as $500 or as much as a $2,000. The freezer is purchased seperately.

Worksman Cycles, a leading distributor of food vending carts, offers ice-cream models that range from $1,300 – $4,000. The price does not include shipping costs which can add hundreds of dollars.

“Investing in these carts is expensive, but my uncle wanted to go back to Mexico so he sold his cart to me,” said Garcia. “The freezer itself runs about $500-$800. It’s probably more now.”

Garcia doesn’t worry much about the money he invested in the cart or how much he invests per month to make a living. Julio is more concerned about his safety.

“A few years ago I was beaten with a bat and left unconscious,” Garcia said. “And that is only one example of the dangers that we paleteros go through.”

Three years ago, Garcia was getting ready to head home when a group of teenagers approached him. He describes one of the teenagers as a male no older than 14 or 15. The teenager asked Julio if he could have four ice creams but that he wouldn’t be able to pay him for all of them because he was short on change.

“Sometimes, if the customers are short like 25 cents or 50 cents, I let it go. I just let them have it,” said Garcia.

That is what Garcia was planning to do on that tragic day. He was going to give them the four ice-creams, one per person regardless of the customer being short. He opened the cart where he keeps the ice-cream, and then he was knocked out.

“I felt pain on the back of my head and I got dizzy. I couldn’t walk. When I woke up, I was in the emergency room,” says Garcia. “They took a days worth of work.”

He was knocked out with the same baseball bat he carries for protection. HPD does not specifically track crimes against paleteros.

Garcia sells ice-cream as a second job. His primary income comes from working as a painter. If he is leaves early from painting, Garcia will load the cart and begin selling ice-cream.

“I paint houses; that’s my main income. If I don’t work, I sell ice-cream. My day usually begins around noon,” says Garcia. “It depends on the time and weather and the season, but I usually begin at noon.”

“I don’t think I’ll be doing this in the next few years. It’s dangerous and after being left unconscious, it made me think about my kids,” Garcia said. 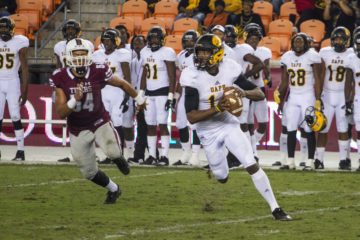