As a volunteer for United We Dream, a national immigrant youth group, Ana Rodriguez joined about 16 of her fellow activists at the watch party they organized for President Obama’s Nov. 20 immigration announcement.

“What brought me here today are the amazing people that I have been able to meet and organize with,” said Rodriguez, associate director at Family and Community Engagement Consultants.

After the White House announced on Nov. 19 that Obama would address the nation on the steps he will take to fix the immigration system, Houston-area activists and nonprofits only had a day to organize watch parties.

FIEL, an organization that advocates for just laws for immigrant youth and their families, utilized social media to help spread the word about their watch party quickly. The Facebook post announcing their event in southwest Houston was shared 33 times and had 96 likes.

“We as dreamers were given the opportunity two years ago to reach for our dreams and breathe a sigh of freedom. We just wish this to come true for our families and friends,” said Cesar Espinosa executive director of FIEL.

Obama’s executive action on immigration is expected to shield approximately 5 million immigrants from deportation, but attendance at watch parties across the city numbered in the dozens.

“I think there’s a lack of understanding of what policies are and how our community is affected by them,” said Rodriguez. “It’s our job as people who understand the power of organizing to reach out to the community and let them know that they can take action.”

On the morning of the announcement, a group of protestors gathered outside of the Mexican Consulate in Midtown to express frustration about the disappearance of 43 college students in Mexico believed to have been killed by members of a drug cartel.

Some immigrant advocates believe the protest may have contributed to depressed watch party turnouts.

“The result was the splitting up of efforts in a common cause – half of us spent the evening in the streets the other spent it in front of the TV,” said Rosalia Guerrero, program manager at the University of Texas School of Public Health on her Facebook page.

While many watch parties around town may not have drawn large crowds, the Spanish media companies saw a surge in viewership.

ABC, CBS, Fox and NBC did not air the president’s speech live. November is “sweeps” month for the networks, it’s a time when viewership determines advertising rates. Many of the digital platforms for the networks ran the speech as did many of the local network affiliates.

The Obama administration chose to announce the speech via Facebook and bypass traditional media outlets to reach the public. The post has been shared over 60,000 times.

For Rodriguez, the watch party was another opportunity to bring people into the movement so United We Dream could facilitate even bigger change.

“That’s our role as educators and as organizers to keep bringing more people in so that they understand that they can have power,” said Rodriguez. 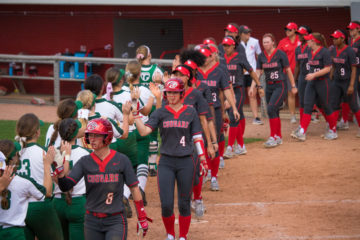