Miguel Posada was not only overwhelmed with grief after losing his sister to a car crash in April 2013, but in the wake of the accident he found himself taking care of his sister’s two children.

“At that point I basically became a single father out of the blue,” Posada said. “We don’t have a lot of family in the U.S., so it’s been up to me.”

Posada, an education sophomore at Houston Community College and University of Houston-Clear Lake, has been happily raising the twelve- and ten-year-old niece and nephew while pursuing his college career, in addition to working two jobs. Despite everything, Posada realized in December of last year that the family wouldn’t be able to afford a proper Christmas celebration.

Fortunately, fate was on his side thanks to the people he had met through the HCC Alumni Association.

“I’d met (Alumni Association Vice President) Cynthia Olmeda in the past, mostly because they’ve helped me with scholarships before,” Posada said.

Olmeda and Posada had been speaking casually when Posada’s financial hardship came up, and after Olmeda mentioned it to her coworkers at the Alumni Association, the group came up with the idea to create a fundraiser to help Posada through the holidays. Not long before Christmas, Posada was shocked to learn that their efforts had raised more than $800 in cash and gift cards aimed to help Posada cover bills for the month, as well as to buy decorations and gifts for his niece and nephew.

“I wasn’t expecting this at all,” Posada said. “[Olmeda] had said things like ‘Oh, I think we’re going to get together and do a little something for you’, but I didn’t expect anything like this.”

Inspired by the drive to provide Posada and his family with a happy holiday season, the Alumni Association has announced that they will be founding an annual Adopt-a-Student program, dedicated to providing emergency help to students in similar situation during the holiday season.

“It’s all about giving back to the community,” said HCC alumni specialist Zandra Henderson.

Currently, HCC plans for the program to be tailored for the holiday season, but a press release states that if the program garners enough support, it’s possible that it becomes a year-round initiative for emergency financial support to students in need.

“I think this is going to be really great for a lot of people,” Posada said. “There are a lot of students who get stuck in situations like I was in, especially around the holidays when people get pressured to spend a lot of money, so there’s always going to be students that need that help.”

For more information on the Adopt-a-Student program or what you can do to support it, call 713-768-6202 or email zandra.henderson@hccs.edu. 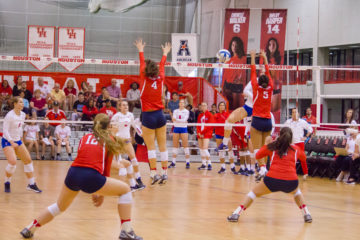