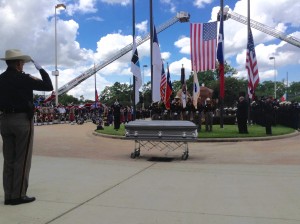 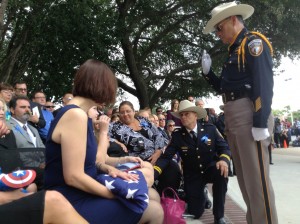 As a procession of police cruisers from around the state and other cars made their way down Woodway Drive to Second Baptist Church for the funeral service Friday for Harris County Sheriff’s Deputy Darren Goforth, people were seen walking from nearby offices, and others were seen standing on the rooftops of buildings two hours before to join the more than 11,000 attendees who were bidding farewell to the fallen veteran.

The service turnout for Goforth, the 47-year-old father of two who was fatally shot in an ambush while pumping gas in northwest Houston, exemplified the impact and unity his death has brought to the Houston community.

Strangers joined family, friends, dignitaries and law enforcement officers from around the nation to give Goforth a hero’s sendoff. By the request of Texas Gov. Greg Abbott, attendees donned blue in support of law enforcement.

Inside the lobby of the main sanctuary were funeral wreaths adorning open spaces. On one side of a column stood a vibrant painting of Goforth in uniform, donated by a local artist. The canvas portrayed the deputy’s official photo in the forefront, with an eagle, the HCSO patch and an American flag, depicting stars that appeared to be crying in the background. To the right of it, was a collage of tiny hearts containing personal messages in each one, donated by a Christian school.

Officers Jay Fox and Jerry O’Dwyer from the New York Police Department, which also lost two officers to an ambush last year, brought flowers to show their respect for their fallen brother.

Inside the sanctuary, Goforth’s flag draped coffin stood at the front as two honor guards stood sentinel on each side.

Although the choir loft was reserved for deputies from Goforth’s unit, large screens displayed photos of Goforth with his family in what was called a celebration of life as the orchestral music played.

HCSO Sgt. Shannon Bowdoin expressed his support toward Goforth’s wife, Kathleen, amid her fears of raising her children alone.

“We are not going to focus on revenge, or getting even or repercussions or anything of that nature,” Bowdoin said. “What she (Kathleen Goforth) wants to focus on is staying focused on what is important, and that is healing this family, the sheriff’s office, law enforcement and our nation as a whole.”

In his eulogy, Sheriff Ron Hickman called Goforth an outstanding professional with a true calling for service.

“As a friend and mentor, Darren provided comfort and compassion for those he made contact with and lived his life as a servant to the community,” Hickman said. “Darren’s life was not taken in vain. Tonight as we watch over the sleeping residents of Harris County, as our radio rings out, we will answer that call in Darren’s honor.”

Goforth’s lifelong friend and fellow officer Lt. Roland De Los Santos of the Houston Police Department talked about meeting Goforth on the bus in fourth grade after the Goforth’s moved to Houston from Ohio. Holding back tears, he shared stories from their childhood to adulthood that painted a picture of Goforth’s humility and charisma, bringing the crowd to gales of laughter at times

“He was just a very likeable good guy, and I will say this, he will be missed,” De Los Santos said through tears.

De Los Santos also shared the touching story of the Captain America shirts that had been purchased for Goforth and his son Ryan to wear together. Unfortunately, they never got the chance to wear them.

At the funeral, Ryan was wearing his Captain America shirt, De Los Santos said, and underneath his uniform so was Goforth.

A GoFundMe account set up by deputy Brandon K. Herlong has raised more than $300,000. Reports estimate that the Chevron gas station where Goforth was fatally shot has raised an additional $192,000.