Despite a rough start to the game, the Houston Cougars manage to keep their undefeated streak with a 49-28 win over the Mustangs of South Methodist University at TDECU Stadium, Thursday night.

In the first half, the game did not go in favor of the Cougars as Mustangs junior quarterback Matt Davis managed to discombobulate Houston’s defense by scoring a couple of touchdowns.

However, between the efforts of senior running back Kenneth Farrow and junior quarterback Greg Ward Jr, Houston would take control of the game while the defense kept SMU at bay throughout most of the night.

“I’m really proud of our guys for responding to some first half adversity,” said Houston’s head coach Tom Herman. “[But] I’ve got to go back and look at the way we planned for that short week because we got pushed around a little bit on defense in the first half.”

Within five minutes of the opening kickoff, the Cougars’ defense was unable to keep Davis from driving the Mustangs into the Houston’s territory for the first touchdown of the night. However, moments later, Ward Jr would retaliate with a 10-yard rushing touchdown for the tie.

SMU would retake the lead with a second touchdown, while its defense would hold off Houston’s offense, forcing them to punt with five minutes left in the first quarter.

The Cougars would seize the opportunity to tie the game at the start of the second quarter when senior running back Kenneth Farrow rushed for a touchdown on SMU’s two-yard line.

The defense’s spark was lit after SMU’s Davis managed to score a third touchdown following a Houston fumble. The Cougars returned the favor when junior outside linebacker Steven Taylor forced a fumble that was recovered by the defense on SMU’s 12-yard line- Farrow capitalized with his second touchdown of the night.

Swarming the quarterback became a trend as Taylor recorded two more sacks later in the game, and junior defensive tackle B.J. Singleton and outside linebacker Tyus Bowser each recorded a sack of their own.

Unfortunately for the Mustangs, the Cougars’ defense continued to wreak havoc. With 41 seconds left, SMU lost the ball on their own four-yard line.

Not wanting to be outdone by the defense, with 26 seconds left in the first half, Ward would take ball in himself to give Houston a 28-21 lead.

“It was a huge momentum shift,” said Coach Herman “To be able to yank that momentum back and go in with some confidence into halftime and be able to come out with it.”

As things finally seemed to go right for the Cougars, the offense fumbled on the opening drive of the third quarter. Fortunately, the defense would hold and regain the ball on a failed fourth-down conversion on Houston’s 38-yard line.

Seven plays later, Ward rushed 10 yards to score his third touchdown of the night and extend the lead 35-21.

After a failed drive by the Mustangs, the lead would extend once more with Ward Jr driving the offense to SMU’s one yard line and Farrow delivering the final push for the touchdown with three minutes left on the clock.

The Mustangs’ went scoreless against the Cougars’ defense throughout the entire third quarter.

Houston would start the fourth quarter with possession of the ball. At the 7:35 mark, Ward Jr would rush for his fourth touchdown of evening, giving Houston a 28-point lead.

With Thursday’s game, Ward Jr collects a total of 11 rushing touchdowns on the season, clinching the UH single season-record for most rushing touchdowns for a quarterback. Case Keenum previously held the record with nine in 2007.

“It’s a big problem for defenses when they have all their guys covering him,” said Farrow on Greg Ward Jr. “He can take off and make plays with his legs.”

Houston goes on to a 2-0 record in the American Athletic Conference while going 5-0 for the regular season. 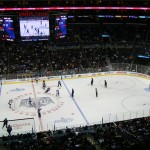