He was defeated in 1991 and 2003 for mayor of Houston. This year, Sylvester Turner is aiming for the city's top spot yet again. Will 2015 be the year for the 61-year-old mayoral candidate? 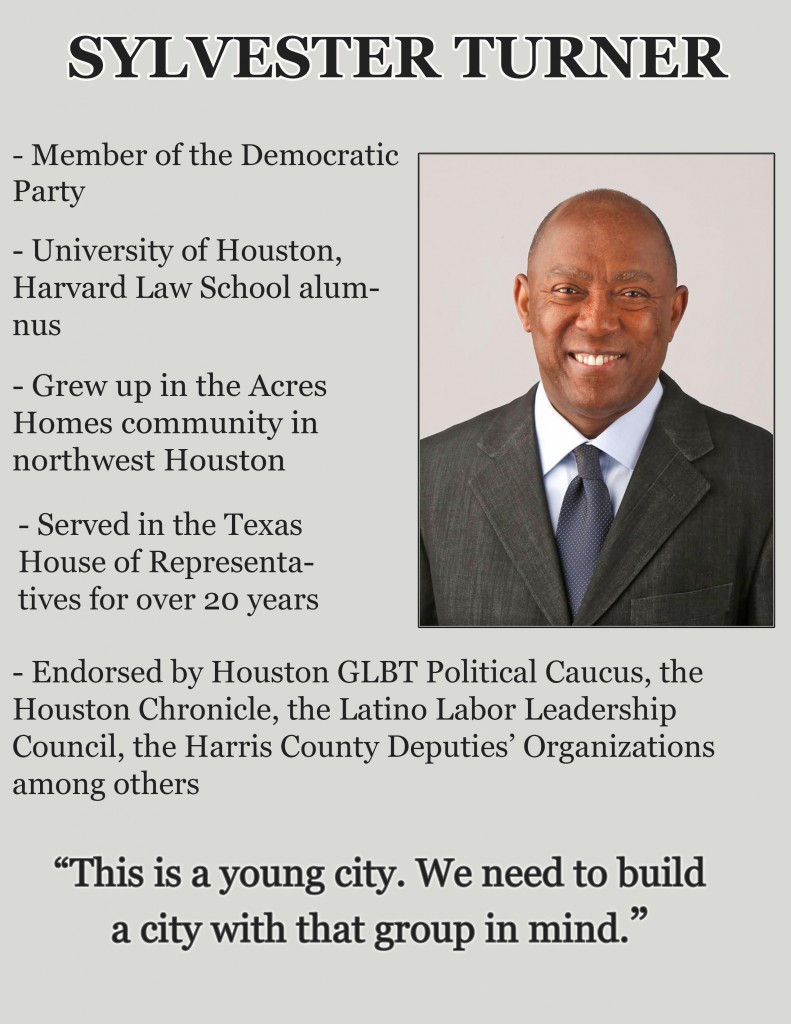 Where he stands on:

Potholes – Wants the city to implement a 24-hour turnaround time for road repairs, meaning the city would respond to reports of potholes in the city within a 24-hour time frame.

Safety – Wants to increase the number of police officers to 2020 and fund the body camera program by lifting the revenue cap, which currently limits the amount of money the city can collect from property taxes.

The Venture: Why do you want to be the next mayor?

Sylvester Turner: I don’t want to give you the standard answer everybody loves the city of Houston, but this is the city in which I grew up. I grew up on the northside. Neither one of my parents graduated from high school, but they did exceptional in raising nine kids. My dad died when I was 13 of cancer, my mom worked as a maid at the rice hotel. When I was a young kid, I would take the bus and come downtown and walk up and down Main Street and look at the tall buildings. I wanted to be in one of those buildings. Years later, I ended up working in one of those buildings in my own law firm and have been in these buildings for 32 years. I want to continue to build a city that will inspire others.

TV: How will you improve the economic inequality?
ST: I was with a group of janitors and fast food workers who were asking for a greater minimum wage. I agree with higher paying jobs and workforce development programs to help people become skilled, so that they can get the training that they need to become plumbers, auto technicians and transportation contractor workers. I want people to become entrepreneurs.

TV: How do plan to improve education in the city?
ST: Education, I think becomes the key when you’re talking about addressing your income inequality. I’m a strong believer in neighborhood schools and in making sure that each school has the academic programs that they need to teach the kids that live within those neighborhoods.

TV: What have been your accomplishments throughout the campaign?
ST: Police, firemen, the municipal workers have already endorsed me along with the AFL-CIO, the Communication Workers of America, Metro police, the Texas Police Officer Association. Twenty Hispanic legislators from across Texas have endorsed me. So, widespread support from communities throughout the city of Houston and I’m very proud of it.

TV: How will you reach out to college students?
ST: Social media. We’re putting a lot of emphasis on social media with my campaign. I have my millennial internship program in the campaign. There are about 200 high school seniors and college students. I have gone to football games in the Aldine ISD, and I’ll be going to some others in the fall like the University of Houston and Texas Southern University. I have held a number of small-group meetings at various clubs and bars in the city like Social Junkie on Washington Avenue. I’ve had a couple events there, so I do not intend to leave out this younger demographic. I intend to have a strong digital social media team. Whether it’s a football game or basketball game I am there.