Houston fans geared up in red raincoats to watch their team fight to remain undefeated in the Cougars’ Homecoming game.

Victory did not come easy this time for the Cougars. Unlike recent opponents, the Cincinnati Bearcats presented a greater challenge for UH by continuing a relentless pace and dominating the passing game, under quarterback Gunner Kiel.

While Houston finished with a total of 161 passing yards, Cincinnati accumulated 523 passing yards. Instead, the Cougars focused on the running game, rushing a total of 266 yards compared to the Bearcats’ meager 66 rushing yards.

Houston led the momentum early in the first quarter with Kenneth Farrow rushing the middle for a touchdown. On the other side, Cinci’s Kiel seemed stagnant in this quarter, completing only 3 out of 9 attempts.

Houston attacked in the next drive, progressing along the field, and answering, when Greg Ward Jr threw an 11-yard touchdown pass to Chance Allen.

In the Bearcat’s next possession, the Cougars were able to recover a fumble from Cincinnati, but did not have a successful drive. The Bearcats took advantage and led the follwing drive to a touchdown by WR Nate Cole, who received a 7-yard pass from Kiel, and tied the game before halftime.

The second half proved more exciting as both teams tried to walk away with a win.

The Cougars came back into the game focused, scoring three touchdowns in the third quarter. Not only was the offense scoring, but the UH defense also managed to deter Kiel and get a score of their own. The second touchdown was a pick-six, by CB Brandon Wilson, returned for 51 yards. S Trevon Stewart then sacked Kiel for the second time, but this time in the end zone for the safety.

Cincinnati’s defense also got their chance to shine when they intercepted a pass by Ward to gain control of the ball. The Bearcats then scored a touchdown and completed the two-point conversion to end the quarter down 30-22.

The last quarter had the Cougars, not only, fighting to maintain their lead, but, also, their undefeated title.

Kiel threw another interception, forced, once again, by Stewart. Ward rushed for a 37-yard gain, but they were halted for a touchdown. Houston kicked a field goal, and this would be their last score of the evening.

The Bearcats began speeding up their drive across the field until they scored a touchdown, and then completed another two-point conversion for a close score of 30-33.

Houston fans grew uneasy when Cincinnati regained the ball, but they were detained by numerous penalties. Bearcats received as many as 4 in one play, the last given to Cincinnati’s infuriated coach.

Cincinnati has defeated UH the last five games they have faced each other, so this was a compelling win for Houston. Despite Cincinnati’s Kiel breaking a new career-high of 496 passing yards, the Cougars demonstrated a dominant team’s resilience. Houston climbs up the AP polls to #16 with a 9-0 record, and prepare to face #25 Memphis Tigers, in their biggest challenge of the season, this Saturday. 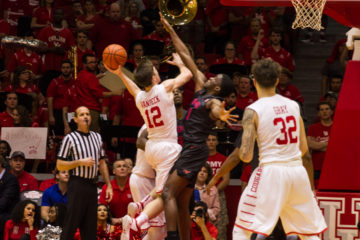