After struggling to score in the first half, and an unexpected injury to starting quarterback Greg Ward Jr, the Houston Cougars relied on the play of JUCO-transfer quarterback, Kyle Postma.

Led by quarterback Paxton Lynch, the Tigers jumped on the Cougars early. Their defense stopped the Cougars on their first six drives, with the offense scoring three times of their own. One of those scores, a 61-yard screen pass to running back, Doroland Dorceus, put the Tigers up 20-0.

With 1:21 on the clock before halftime, Ward went down with an ankle injury, forcing Houston coach Tom Hermann to insert Postma into the game. Postma led the Cougars on a five-play drive that ended with a 30-yard pass to, wide receiver, Lindell Bonner for a touchdown, Houston’s first score of the game.

Coming out of halftime, Hermann stuck with Postma for the rest of the game. The backup quarterback led Houston on a ten-play drive that ended with a Kenneth Farrow seven-yard touchdown run, closing the gap between the Cougars and the Tigers.

At the start of the fourth quarter, the Tigers upped their lead to 34-14 after running back Tevin Jones ran 25 yards for the score.

Down three scores, the Cougars’ defense stepped up by creating turnovers and getting stops. Houston linebacker, Elandon Roberts, got his first career interception, setting up another scoring drive for the Cougars.

With four minutes left, and after stopping Memphis’ offense, the Cougars took the field for a critical last drive.

Postma connected with Ayers and Bonner for 31 yards, along with a 22-yard rushing play that put Houston in position to score. After a defensive pass interference penalty, Postma ran in for a six-yard, game-winning touchdown.

“It’s indescribable, honestly. I still don’t even know how to put this all into words,” Kyle Postma on said on the comeback win. “It’s crazy just coming out and being able to play for my brothers. Just making plays out there on the field.”

Postma finished the game with a career best 21 for 36, 236 yards passing and one touchdown. He also had six carries for 49 yards and a rushing touchdown.

The ‘next man up’ culture of the Cougars was shown in full force tonight. Now they are a step closer to reaching their goals set up in January with the arrival of coach Hermann, who is now the first coach to win his first 10 games in Cougars history.

“Again, our goal was not to be 10-0 after 10 weeks. We never set out to do that,” said Coach Tom Hermann. “Our goal was to win our conference, and, by winning tonight, we’ve taken one step further on our journey.”

Next the Cougars travel to Hartford, Conn. where they will face off against another division rival, the UConn Huskies (5-5). With two more games left on the schedule, the Cougars are in position to play in their first American Athletic Conference Championship game and a chance to play in a New Year’s Day Bowl game. 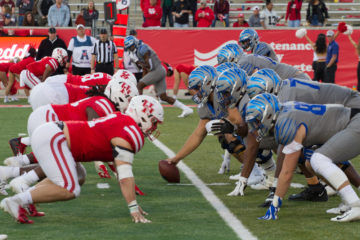