The American is making its name in the college football ranks

That’s right. Three-year-old American Athletic Conference has four teams ranked in the AP top 25 poll: Memphis (25), Navy (22), Temple (21) and Houston (16). Houston is one of six teams with an undefeated record at 9-0. All season long, teams from the American have been playing impressive football against some top ranked teams from the “Power 5” conferences, and the NCAA has taken notice. As the college football season is wrapping up its final three weeks of the regular season, these four teams are playing hard to get into a New Year’s Day bowl.

Memphis (8-1), led by junior quarterback Paxton Lynch, has been the team of the American. Since the end of last season, they maintained a 15-game winning streak until last week’s loss to Navy. The Tigers season highlight is a big win against Ole Miss, who was ranked #13 earlier in the season. Despite the one loss against a conference opponent, Coach Justin Fuente is still confident in his team, even though they have a tough task on Saturday against the Houston Cougars.

The Midshipmen of Navy are having an impressive first season in the American Athletic Conference with a 7-1 record. Last Saturday’s win against Memphis was Navy’s first win against a top 15 opponent since Nov. 17, 1984, when they beat #2 ranked South Carolina. Led by quarterback Keenan Reynolds, who is tied for the most rushing touchdowns (77) in his football career with three games to go, Navy has won 13 of their last 15 games- both losses from Notre Dame. Navy’s triple option rushing-offense has been hard to stop all season. Saturday is Senior Day at Navy, and they will be facing the SMU Mustangs. Coach Ken Niumatalolo is letting his team know not to let the Mustangs’ 1-8 record fool them; that they are a better team than their record lets on.

Temple Owls are the leaders of the American East Division, and it is theirs to lose. The Owls’ defense has been the catalyst for their success this season. Their 24-20 lost to Notre Dame two weeks ago, was their biggest game, and biggest let-down, of the season, but they bounced right back against SMU with a 60-40 win to improve to 8-1. That game, QB P.J. Walker threw for four touchdowns and rushed for another score, which was their best offensive output this season. Though they have three games left before the end of the regular season, they should hold on to the East Division and a place in conference championship game.

Tom Hermann is the new, young star-coach in the NCAA. He has proven his stardom by leading the Houston Cougars to a 8-0 record, and a #16 rank in the AP and Coaches Poll. Led by Quarterback Greg Ward Jr on offense and safety Adrian McDonald on defense, the Cougars are the most balanced team in the American. Their biggest wins of the season, so far, were been against Louisville and Vanderbilt. The next three games on the Cougars schedule should solidify their place in the rankings amongst the top teams in the nation. The first test for the rest of the season will come Saturday, against the Memphis Tigers, who are coming off of a loss against Navy and are looking for redemption. The Cougars will also be facing UConn and Navy later this season. Both teams are riding high off of wins this past weekend, and they are looking to get postseason bowl bids. Hermann’s #H-TownTakeover campaign has taken hold on the field and in the City of Houston. The Cougars’ destiny is in their own hand, and it starts, officially, Saturday against Memphis.

The American Athletic Conference has positioned itself for success within the NCAA football rankings with quality wins and great play from its teams. The American is not a pushover mid-major conference. It is a collection of teams that have history in the NCAA, but have been overlooked by the “Power 5” conference, and they have been making their mark the past two seasons. In its third season, they are showing the college-football world it can hold its own.

The American is making its name in the college football ranks 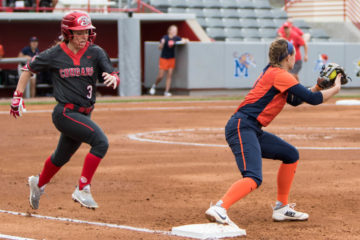