The intensity was high as the Houston Cougars hosted their conference rival, Temple Owls, for a chance to move up the ladder in the American Athletic Conference Sunday evening.

“Tonight, it was just two good teams,” said Houston head coach Kelvin Sampson. “They came out and staggered us early in the game.”

The last time these two faced one another, the Cougars forced the Owls to play their game. Unfortunately, that wasn’t the case this time as Temple managed to hold an eight-point lead within the first four minutes of the game.

Temple’s offense continued to penetrate Houston’s defense, extending their lead by 13 points with 11 minutes left in the first half.

However, Houston wasn’t going to go down without a fight.

Rob Gray Jr. and Devonta Pollard led the Cougars’ counter attack, managing to close down the margin to five points going into the half.

Gray Jr and Pollard recorded a combined 39 points for the game. Damyean Dotson also contributed by scoring 20 points of his own.

“We were down five and went up 10,” Sampson said. “But they made a three there and then another kid drove across the lane and made a shot. They make plays and do whatever it takes.”

At the start of the second half, the Cougars played differently as they came out and started scoring against the Owls’ defense. The Cougars were able to take the lead for the first time, going up two in the first three minutes of the half.

Suddenly, it became a shoot-out as both teams managed to score easily, but it would be Houston who managed to get the tie-breaker, as they managed to get a 10-point lead with 11 minutes left on the clock.

Unfortunately for Houston, Temple’s Obi Enechionyia was their kryptonite. Enechionyia scored a total of 26 points against Houston.

Ecechionyia paved the way for Devin Coleman’s three-point, tie-breaking shot for a 67-64 lead with 16 seconds left.

“That’s how they beat SMU,” Sampson said. “The same kid (Obi Enchionyia) was 7-for-7 against SMU when they beat them.”

Houston had one final shot to tie the game with six seconds left, only to come up short at the buzzer.

With the loss against Temple, Houston dropped to 19-8 overall, tied for the fifth seed with UConn, as they both now have 9-6 records in the American. 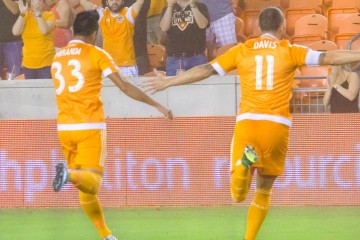