By: Ruthy Muñoz and Sara Samora

Hours before the start of the event, University of Houston students began lining up at the Student Center Theater to attend an exclusive Q&A session with CNN host Anderson Cooper, who was in town to cover the last GOP debate before Super Tuesday.

Student began trickling in at around eight in the morning and by noon, the line had wrapped around the corner of the theater where the event was being held.

A graduate of Yale University, Cooper said he got his start as a war correspondent. After having trouble finding a job, Cooper said he made himself fake press credentials, and started out with just his camera.

"If you're able to find something that moves you, you can accomplish great things." @andersoncooper #EGMNCovers pic.twitter.com/vtaax2e0Re

“He would take so many vacations and I was the guy who was always filling in for him,” said Cooper on how he got his foot in the door at CNN.

Interspersed with funny anecdotes, Cooper also answered questions and shared career advice with the dozens of students who filled the theater. He encouraged them to find their voice to write in, get internships, follow their bliss and to make themselves indispensable in their workplace.

"In any job you have make yourself indispensable. Work the shifts nobody wants to work." #andersoncooper #uh #EGMNcovers

On a lighter note, Cooper said he’s not one to criticize people when it comes to TV programs, admitting he’s an early NeNe Leakes fan. Cooper said he is the only journalist to be drunk dialed by the reality star.

So what did Leakes say to him when he answered?

“Don’t be tardy for the party!” 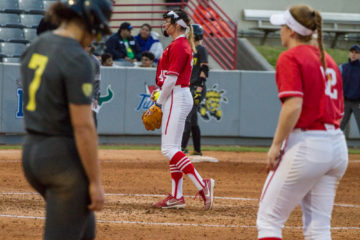