The Houston Cougars opened the Shriners Hospitals for Children College Classic at Minute Maid Park against a former rival of the defunct Southwest Conference, the Texas Tech Red Raiders.

With starting pitcher Andrew Lantrip looking to make a statement, the Cougars appeared poised to stretch their winning streak to five against the Red Raiders. Texas tech, however, wasn’t going to make it easy for Houston.

Like their previous games, the Cougars didn’t waste any time to get on the scoreboard. Joe Davis hit a double to score Connor Hollis for an RBI with two outs. Houston would end the top of the first after Justin Montemayor popped up to shortstop.

The Red Raiders looked ready to wreak some havoc, but Lantrip managed to keep them scoreless for three complete innings, allowing just one hit and leaving one batter on base.

However, there seemed to be a slow shift in the fourth inning as both teams played better defensively.

While Houston was scoreless after the first inning, Texas Tech was given life as Stephen Smith hit a homerun to right field with a gargantuan swing that tied the game 1-1.

Houston’s woes would not end there.

Fortune didn’t favor Lantrip as Texas Tech would put runners on the corners with one out, forcing Houston to make a pitching change with Aaron Fletcher replacing their ace.

Lantrip massed a total of seven strikes, one walk, seven hits and three runs in his 5.1 innings.

The Cougars tried to mount a comeback after scoring their second run in the top of the eighth, but the Red Raiders wound up out-dueling them for the win.

The Cougars were handed their first loss of the season.

Moving forward, the Cougars face a dilemma come tomorrow when they face the  Arkansas Razorbacks without its starting left pitcher Seth Romero – who was the AAC preseason pitcher of the year – after suspending him indefinitely for conduct detrimental to the team.

John King looks to be the probable starter replacing Romero at the mound for game two of the College Classic. 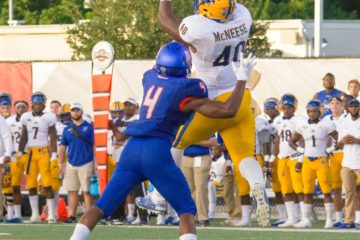