The Cougars End Their Drought, Take Care of Tulsa at Home

Desperate for a win after dropping four straight games, head coach Kelvin Sampson knew he had to up the style of play against the Tulsa Golden Hurricane.

“When we left the meeting Sunday, we knew what we had to do and that was push the pace,” said Sampson. “We’re no good when we’re slow because we attack man-to-man defenses pretty well.”

And push the pace they did, as point guard Galen Robinson Jr helped the Cougars set the pace early with a 11-3 lead against the Golden Hurricane.

“I just came out tonight and just wanted to play aggressive,” said Robinson. “The past couple of games, I’ve gotten away from who I am and that is a fast-paced point guard.”

Robinson poured a career-high 19 points while connecting on 8-of-11 shots from the field, including 3-of-5 from the 3-point line and adding three rebounds with a game-high four assists.

However, Tulsa wasn’t planning to surrender as the Golden Hurricanes began to show persistence and  closed the gap by five points minutes later in the first half.

Despite Tulsa’s resiliency, it wasn’t enough to deter the Cougars. Houston sped up the pace, firing on all cylinders, not once giving up the lead to the Golden Hurricanes while the points kept adding up.

Houston had built a 21-point lead against Tulsa, as they went into half time with a 40-27 score.

“We didn’t let off the pace,” said Sampson. “We had a lot of guys getting easy baskets before we slowed down. We’re not good slow.”

When Houston returned to the court to start the second half, the Cougars continued to show their fast pace game as they maintained their 21-point lead with nine minutes into the game for a 63-41 score against the Golden Hurricanes.

However, like the previous games, Houston seemed to lose momentum. Tulsa benefited from some mistakes made by the Cougars, allowing the Golden Hurricanes to tighten up the score to 69-54 with six minutes left in the second half.

Fortunately, Houston made quick adjustments to adapt to Tulsa’s sudden change of pace to regain control of the ballgame and finish strong for the win with an 81-66 score.

“We didn’t panic,” said Robinson. “We kept on finding the open man and sometimes separate from each other, but we stayed together.”

With the win, Houston breaks a four-game losing streak and improves its record 14-6 while sitting at .500 against the American Athletic Conference.

The Cougars End Their Drought, Take Care of Tulsa at Home 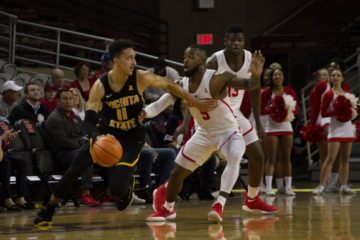