The Cougars Take Care of the Knights at Home

The Houston Cougars cruised over their American Athletic Conference rival, Knights of Central Florida, on Saturday afternoon at Hofheinz Pavilion.

The Cougars, with Devonta Pollard leading the offense, set the pace of the game as they maneuvered over the Knights’ defense, allowing LeRon Barnes and Danrad Knowles to score points as well.

“We were preparing for him [Tacko Fall] and figuring out what we were going to do,” Sampson said.

Within the first 10 minutes of the game, the Cougars were able to sit on a comfortable 13-point lead.

The Knights tried to close the gap against the Cougars, but their efforts proved to be naught as Houston continued to pile up points, ending the first half with a 40-25 score.

“It was a good solid game,” said Sampson. “I am really pleased with the continuous improvement at the free-throw line.”

7 minutes into the start of the second half, nothing had changed as the Cougars kept their momentum against the Knights, leading the scoreboard by 24 points (51-27).

“He [Falls] makes everyone look small. You don’t realize how big he is until you stand next to him,” Sampson said. “I stood next to him at the free-throw line to shake his hand, and I felt like a 5-year-old.”

Unfortunately for the Knights, blocking wasn’t enough to stop the Cougars from scoring and  giving away 14 turnovers.

Houston continued to dominate throughout the rest of the game, not once relinquishing their lead. The Cougars remained ahead by 19 points in the last three minutes of game.

Houston would go on to win against their AAC rival, snapping a three-game losing streak against Central Florida.

Pollard scored a total of 16 points while on connecting 8-of-9 tries from the free throw line. Barnes and Knowles each contributed 13 points of their own.

With a win against the Knights, the Cougars won for the fifth time in their last six games and moved to 18-7 overall, 8-5 in the American Athletic Conference.

The Cougars Take Care of the Knights at Home 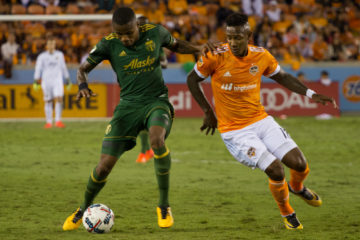