The Houston Dynamo started their 2016 MLS journey Sunday afternoon as the host of their first game of the season for the fourth year in a row when they faced the New England Revolution at BBVA Compass Stadium.

In a game with many brand new faces for the home team, it was unclear how the fans would react for the opening match.

With the first kickoff slowly approaching, the fans did not disappoint as they showed their true colors by almost filling up the stadium, witnessing one of the best season openers in Dynamo history.

The crowd of 21,594 was a blend of black and orange, as the fans proudly wore the new black secondary jerseys for the Dynamo, who discontinued their traditional white visitor kits for at least this season.

Not only were the fans eager to see their team start a new season, but the new Dynamo players also wanted to see what the Houston crowd was all about.

They sure felt all the energy after the game ended in an electrifying 3-3 tie, and they felt the support from the home crowd throughout the entire game.

“We hope that they keep it that way,” Cristián Maidana said after the game, in which he scored his first goal as a member of the Dynamo. “Personally, for me, it’s very important for them to be there, encouraging us. That gives me much more confidence and makes me want to keep running and keep looking for the ball.”
So far, he is content with his situation.

“I’m happy for everything, for the people and the team too” he said.

The part of the crowd who was most excited was the Dynamo supporter groups, who chanted from their new and improved supporter section, relocated from the southeast corner to the north end of the stadium. This way, the Brickwall Firm, El Batallon and Texian Army are able to shout and play their instruments in a larger area.

The Houston Dynamo will receive rival FC Dallas on Saturday, March 12, in a predicted sellout that fans will not want to miss. 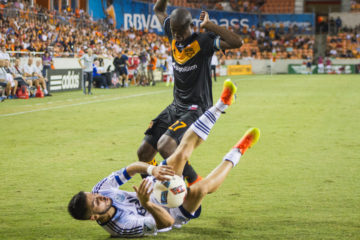