Under unfavorable weather conditions, the Houston Cougars had their hands full for nine innings against the Texas A&M Aggies.

“We created a hole for ourselves in that first inning,” Houston head coach, Todd Whitting said. “But we never stopped playing.”

That wasn’t the case when Houston gave the Aggies an early lead in its 7-2 loss to TAMU at Schroeder Park Tuesday night.

The Aggies jumped on Houston’s starting pitcher, John King, early in the first inning to get on base. TAMU’s J. B. Moss smacked the second pitch of the game off the top of the fence for a 350-foot leadoff single.

Houston would make two mistakes that gave the Aggies the advantage when Ryne Birk reached on fielder’s choice, allowing Moss to score.

One score with a runner on second later, the Aggies made a statement in the form of Nick Banks hitting a two-run home run to push them to a 4-0 lead against the Cougars.

The Cougars answered back at the bottom of the second by scoring two runs of their own. Sadly for Houston’s fans, that would be the only runs they would score.

“We didn’t go out there and throw the first punch like they’re able to do,” coach Whitting said.

The Cougars were unable to slow down the Aggies momentum when King was tagged for a fifth run in the fifth inning.

King was replaced at the start of the sixth inning by Bubba Maxwell after having allowed five run, six hits and four strikeouts in five innings.

Moss continued to be a thorn in the Cougars’ side by hitting a solo home run in the seventh, pushing the Aggies 6-2.

Outside the diamond, the tension was high in the stands between the Aggies and the Cougars’ faithful when the visiting team taunted Houston’s reliever by chanting “ball one, ball two, ball three” repeatedly until Jackson threw his first strike of the ninth.

Jackson wound up being replaced after his control struggled, leading to two walks in nine pitches.

At the bottom of the ninth, the Cougars tried to mount a rally by loading the bases before the Aggies put them away for the victory.

With tonight’s loss to TAMU, Houston drops 2-5 against ranked teams.

The Cougars will be on the road for the next series against No. 19 East Carolina for their first conference series of the season. 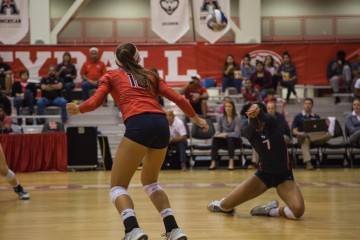