Coming back after two road losses, the Houston Dynamo returned to BBVA Compass Stadium Sunday afternoon only to lose their lead in the fourth minute of stoppage time after Seattle managed to score the equalizer for a final of 1-1.

The first half had one team on the field.

Other than a couple of free kicks given away by the home team, of which the Sounders didn’t take advantage, the Dynamo went up with a well-deserved goal in the 35th minute.

“We definitely dominated the first half,” defender Jalil Anibaba said. “We did a good job with being on the front foot.”

Dynamo gave their first warning early in the fifth minute when Will Bruin took a shot from outside the box that went straight into the hands of Seattle’s goalkeeper Stefan Frei.

Houston continued being a dangerous team, holding the ball for the majority of the first 45 minutes and generating goal-scoring opportunities from both flanks.

Clint Dempsey gave the Sounders their first clear on-goal shot in the 32nd minute. Dempsey executed a free kick that went to the right side of Joe Willis’ goal, but it was just outside.

Dynamo’s hard work paid off in the 35th minute when team captain Giles Barnes scored a stunner from inside the box following a cross from Anibaba. The midfielder tapped the ball with a first touch and placed it on the top-left corner of Frei, who stood still with no chance of reaching the ball.

The tables turned in the second half as the Sounders managed to get back in the game by keeping the ball and slowly creating chances that would only boost their confidence for the remainder of the match.

Houston seemed to be set with the 1-0 lead and defended for the rest of the game not knowing that there would be consequences for that.

Seattle switched gears and pressured more than ever- all for the mission of tying the match.

The equalizer came in the 94th minute when Anderson managed to get past Leonel Miranda and delivered a deadly cross that met Sounders’ midfielder Chad Marshall’s right foot and the inside of the goal.

With this tie, the Dynamo lose two valuable points in the last minute for the second time at home this season, previously doing it in their first game of the season against the New England Revolution.

The Dynamo will host LA Galaxy this Friday in their fourth home game of the season. 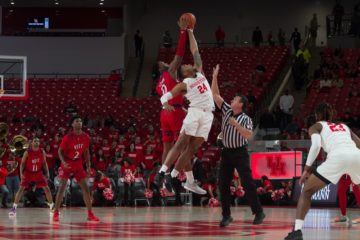