July 28, 2021 Francisco Casillas
Home»News»How one local business is bringing awareness to human trafficking, one coffee cup at a time
News

How one local business is bringing awareness to human trafficking, one coffee cup at a time

When A 2nd Cup coffee shop opened its doors in 2012, it was aiming to do more than just serve up freshly brewed coffee to caffeine enthusiasts in Houston. The non-profit coffee hub located in the Heights was looking to encourage its patrons to raise awareness and put an end to the city’s human trafficking problem.

This past January, UNICEF USA and A 2nd Cup hosted a screening of the documentary “Not My Life” and a panel discussion in honor of human trafficking awareness month.

“Not My Life”  explores the many aspects of human trafficking affecting the world, including domestic servitude, begging, child soldiering, sexual violence, sex tourism and forced labor.

Human Trafficking – Not My Life from Worldwide Documentaries on Vimeo.

The event drew Houstonians seeking to know what is being done about human trafficking in the city and specifically how victims of human trafficking are being helped. This connection to a local community is part of the reason “Not My Life” continues to gain momentum and be seen across the nation.

“Human traffickers are earning billions of dollars on the back and in the beds of our children, and yet no one knows this is happening,” said Robert Bilheimer, the film’s director and Academy Award nominee. “We have a huge responsibility right now to learn the truth and act on it.”

The film highlights different forms of trafficking by taking viewers on a journey through five continents and introducing them to survivors of trafficking and advocates in the field.

Panelists Jenna Cooper, community education specialist at United Against Human Trafficking; Constance Rossiter, YMCA social responsibility director, and Rebecca Pfeffer, an assistant professor of Criminal Justice at University of Houston-Downtown, spoke about signs to look for and the effects of human trafficking in the Houston community, urging viewers to call the human trafficking hotline if they see something that doesn’t feel right.

According to Cooper, some of the signs to look for include a traveling salesman insisting on a sale late at night, someone afraid to leave their job, inconsistencies in their stories or someone who is rarely seen outside alone.

The National Human Trafficking hotline (888-373-7888) works with law enforcement and agencies to help identify victims and get them the help they need. In the case of Las Palmas, a case in which a 70-year-old woman was convicted of sex trafficking in Houston, Rossiter said that once the victims were identified, some were reunited with their families, given restitution and all were issued visas.

“Legislation only works if human trafficking victims are properly identified,” Rossiter said. “If they’re identified as a criminal, but are not a criminal, they miss out on their rights.”

Since the launch of the “End Trafficking” campaign in 2012, UNICEF USA has been partnering with Worldwide Documentaries, the film’s distributor, to screen “Not My Life” and raise awareness. They work with UNICEF Campus Initiative and high school clubs, civil society groups, and faith-based organizations to host screenings across the country.

“We have found the response to the film to be one of transformation, and empowerment from the viewers. Many people still comment after watching the film, ‘I just did not know that this issue exists’,” said Heidi Ostertag, senior producer for Worldwide Documentaries.

The coffee house has a sprawling new location with plenty of lighting and volunteer guest baristas. Profits from the coffee shop go toward funding support to human trafficking victims. In addition, their back room allows the coffee shop to hold private functions and lend their facility free of charge to nonprofit organizations like themselves, while helping to bring awareness to the community about social issues affecting the city.

How one local business is bringing awareness to human trafficking, one coffee cup at a time 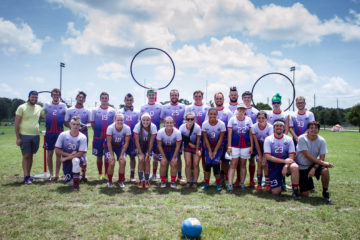