Costa Rica and Colombia collided for their third and final game of the group stage Saturday night at NRG Stadium in Houston.

The Costa Rican squad went out on to the field aware that they had no chance of moving on to quarterfinals after the US national team defeated Paraguay moments before the start of the match, advancing to the next round along with the pre-qualified Colombian team.

It was only the second minute when Costa Rica midfielder Johan Venegas scored a stunner after hitting the ball with a powerful shot from outside the box with his right foot. Despite Colombia’s goalkeeper Róbinson Zapata’s dive to get to the ball, the shot had been perfectly placed in the right corner and left him with no chance of reaching it.

Colombia didn’t wait too long before defender Frank Fabra scored in the sixth minute after starting a run by himself, losing the ball, and ending back with it in his possession to score the equalizer.

Costa Rica received another opportunity in the ninth minute when Bryan Ruiz headed the ball only to have the attempt sail over Zapata’s goal.

In the 15th minute, Venegas tried scoring his second of the night, but was denied by Zapata, who was challenged by a powerful curving shot that went straight to his hands.

Colombia would get a chance to score again in the 24th minute when defender Stefan Medina took a shot inside the box after a set-piece free kick. Pemberton saved the right-footed attempt.

In the 28th minute, Colombia striker Roger Martínez managed to get inside the box and take on a Costa Rican defender to execute a shot that was blocked by Pemberton.

Costa Rica scored in the 34th minute after an astonishing play by Johan Venegas who took on Colombian defender Felipe Aguilar on the left flank and made a powerful mid-level cross. The cross was destined for one of his teammates, but found Colombian defender Frank Fabra, who in an attempt to clear the ball, scored an own goal.

It would remain an intensive match for the second half.

Costa Rica scored their third goal in the 58th minute when midfielder Celso Borges impacted the ball on a first-time low volley after receiving a cross from Bryan Oviedo from the right side of the field.

One minute later in minute 72’, Colombia would put the match 3-2 after Marlos Moreno took a lethal right-footed shot after a cross from midfielder Juan Cuadrado.

Costa Rica’s response did not take long when, in the 75th minute, midfielder Christian Bolaños made a perfect cross to Venegas who took a diving header that nearly missed the inside of the net.

The remainder of the second half was played by a hungry Colombia, who attempted to score the equalizer. Costa Rica on the other hand, defended with everything to keep the win and managed to do so. Costa Rica left the tournament with its win and gave its fans something to be thankful for.
With this loss, Colombia moves down to second place in Group A, giving USA first place and the runner-up of Group B in the quarterfinals. Colombia will have to face first place of Group B in the next round. 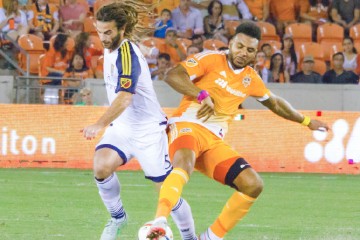