Entering the match without a goal or points from their previous six games, the Houston Dash were committed to ending their drought.

“They seemed to be a lot more focused on the things that we’ve been trying to improve on over the last couple of weeks,” Dash head coach Randy Waldrum said.

The Dash indeed made improvements.

The Thorns were caught off guard within the first seven minutes of the game by Houston’s tenacity when forward Rachel Daly scored the first goal of the night.

The team captain, Kealia Ohai dribbled into the box and delivered a cross intended for midfielder Melissa Henderson. The cross missed Henderson but Daly struck it at the edge of the six-yard box for her second goal of the season.

“Getting a goal early on is huge because it sets the tone for the rest of the game,” Daly said. “As a forward, all you want to do is score goals.”

Confidence within the Houston roster grew, not letting up the pressure and held the 1-0 lead going into the half.
“I think they all agreed when we got in the locker room that it still wasn’t good enough,” Waldrum said. “The key going in was that everybody was focused on trying to get the second goal. Make sure we didn’t give anything, but to focus on getting that second goal.”

The Thorns tried to make plays against the Dash, but, like the in the first half, their relentlessness overwhelmed them with Houston rapidly taking control of the game.

Houston made an attempt to score again in the 67th minute when Ohai kicked a shot with laser accuracy from Portland’s penalty area only to be deflected by Michelle Betos.

A minute later, Houston wasn’t denied a second time when midfielder Amber Brooks scored the second goal of the night.

The Dash wound up sealing their victory when Daly scored the third goal in minute 82.

“They’ve continued to believe and fight in the locker room with each other, and the staff has still been good,” Waldrum said.

“Even in rough times where is may be perceived outside that everything is going south on you, the team itself has stayed together.”

With the win against Portland, Houston snaps their consecutive losing streak.

“It’s huge,” Brooks said. “Coming into this game we were at six consecutive 1-0 losses. “Playing at home, we knew we wanted to use the heat to our advantage.”

The Dash will go on the road for the next game against the Chicago Red Stars hoping to continue the momentum they’ve built with a strong mindset.

“We have to just keep it going,” Ohai said. “Like I’ve said this whole season, it’s a mentality thing, and finally we have that mentality.” 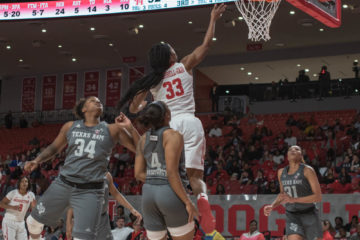