Cougars motivated while preparing for this weekend’s scrimmage

“Today was good,” Herman said. “We’ve been doing this long enough to understand yesterday was the eighth day in a row, and you’re coming off of a 150 play scrimmage before and you’re back in full pads.”

During practice, Herman’s focus remained on the offensive squad, which continued to perform at the high demands of their head coach- especially when the seniors helped out in guiding and molding the new recruits who haven’t completely bought in into Houston’s culture.

“There are some young guys that still wandering. ‘What the heck is this?’ ‘What are we doing?’ ‘Why are we going so hard?’” Herman said. “The older guys are doing a really good job of teaching them. It’s refreshing to come out here and know that you’re not having to teach how we practice. We are not having to teach expectations, we are not having to rip tail because the guys got bad ball security. The expectations on how we practice are already instilled in the culture, so now we can focus on the details of each play call.”

The extra help from the seniors would make the coaching staff’s job much easier come Sunday to determine the depth chart. Coaches will choose who is going to get red-shirted and who’s going to play and make sure the right players are getting the right amount of reps for next week’s practice.

“This Saturday’s scrimmage is a big evaluation for those young guys,” Herman said.

However, while the offense has been getting ready for Saturday, the defense appear to be ahead of the game.

“To play great defense, the calls don’t matter at all,” Herman said. “It’s run and hit. You can mask a lot of mistakes if there’s 11 guys flying towards the football and hitting people when they get there. I would be very concerned if the offense was ahead of the defense right now because it’s a very standard operating procedure that through nine practices the defense is going to be ahead because it’s going to be a little bit easier to install.”

Robinson joins the same company of Ed Oliver and Collin Wilder, who were the first to lose their blue stripes during the team’s preseason camp.

Meanwhile, the secondary seems to be coming along.

Saturday’s scrimmage will provide much-needed information on who to play with the Cougars having three Saturdays left before taking the field against the Oklahoma Sooners on Sep. 3.

Cougars motivated while preparing for this weekend’s scrimmage 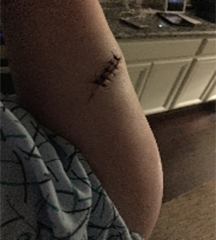