With a disadvantage in favor of Toronto FC, the Toronto FC were unable to overwhelm the Houston Dynamo at BBVA Stadium.

“I thought we started the game really well,” Wade Barrett, Houston Dynamo interim head coach, said. “The first fifteen minutes were exactly what we had talked about- what we had planned. I was really pleased with how the game started.”

Minutes after the start of the game, the Dynamo didn’t waste a step by aggressively finding a gap within Toronto’s defense.

In the eighth minute, Mauro Manotas chipped a pass in, behind the Toronto defense to Cristián Maidana, who buried a right-footed volley in the back of the net to give the Dynamo an early 1-0 lead.

Houston felt energized after taking the lead, hard pressing Toronto offensively by taking shots at any given opportunity.

Toronto’s goal keeper was not one to be intimidated easily.

Toronto’s Alex Bono earned a save after Dynamo’s Andrew Wegner shot from the edge of the box, aiming for the near post.

After a couple of saves in effort of their defensive play, Toronto felt the urgency to score.

Their opportunity to equalize the game arrived in the 24th minute on a first-touch shot from Jozy Altidore off a corner kick. Sebastian Giovinco played a low corner to the top of the box, allowing Altidore to blast a right-foot effort into the roof of the net.

Houston sought to regain the lead in the 33rd minute when Agus Garcia turned a shot from a rebound off a corner kick, but Altidore was well-positioned to clear the shot off the goal line.

Both teams were unable to score for the remainder of the first half, but the Dynamo would hit the lockers with one less player.

Just seconds before halftime, Abdoulie Mansally was shown a straight red card after he lost his balance while racing Giovinco for a long ball.

The ejection was Mansally’s first in the season- first one with the Dynamo and fourth in his MLS career.

“We knew that they had a lot of possession of the ball,” Houston’s Collen Warner said. “At the same time, we knew that together we could set our block pretty deep and that’s what we set out to do.”

“We played with 10 men against a team of their caliber – that’s very difficult,” Maidana said.

Mansally’s ejection led Barrett to bring on Raúl Rodriguez for Wenger after halftime to reinforce the back line as the Dynamo began the second half a man down.

“I told him to be committed and that it was going to be tough and that he needed to stay organized by talking,” Barrett said.

Barrett’s defensive plan worked with the Dynamo being able to hold their opponent at bay. At the same time, Houston went out on the counter attack. Allowing them to create a couple of dangerous combinations in the 55th minute between Manotas and Maidana.

Both teams wound up going back and forth through the rest of the second half with Toronto being unable to break the tie against a 10-men Dynamo roster.

“They’re an honest, hardworking team,” Toronto’s head coach Greg Vanney said. “I think they have good organization, in that way they make it difficult for you to create chances.”

Houston’s head coach praised his squad after their adaptation after Mansally’s ejection.

“This is what I expect from the group,” Barrett said. “I’m inspired to see effort and energy like that but I do expect it and this group has given that over the last couple months.” 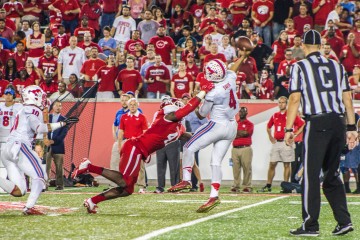