This Texas-sized taco is attracting foodies from across the country

A recent viral picture has surfaced on Facebook when a customer of Chacho’s Tacos posted a photo of  her gigantic taco while taking the Almighty Chacho Taco Challenge in Corpus Christi, Texas.

Foodies are flocking to South Texas to see if they can finish the Texas-sized taco which weighs in at 3.5 lbs.  Chacho’s Tacos, located at 3700 Ayers Street, has been the talk of social media as the taco selfies spread through the internet.

Facebook user, Norma Toro, posted the selfie which received more than 1,000 likes and told many of her friends how hard it was to finish the $9.99 taco that could be easily mistaken for a huge burrito. 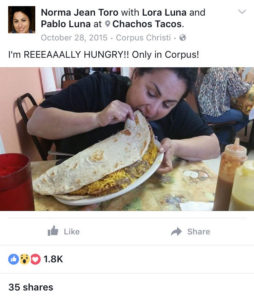 According to Chacho’s Tacos owner, Mary Gutierrez, only five people have finished the challenge.

“My husband couldn’t even finish it,” said Toro.

During the “All-Mighty Chaco’s Taco Challenge,” customers have 10-minutes to finish the taco. If you beat this tasty challenge, you a will win a free shirt and your picture placed on the wall.

The family-owned restaurant has been in business for 16 years and was named after Gutierrez’s husband.

“I always said to my husband when I open my own restaurant it will be called Chacho’s Tacos,” Gutierrez said.

Sadly, you can only find this challenge in Corpus Christi, but customers swear it’s worth the drive.  The restaurant is popular among locals and has been featured in Texas Monthly and Tacos of Texas.

The only thing that’s probably recommended with this taco, is a bigger napkin and a to go container.

Brittany Taylor is a broadcast journalism student from the University of Houston. She's a former digital content producer for KHOU and currently coordinates breaking news for EGMN. Her goal is to host her own entertainment show.

This Texas-sized taco is attracting foodies from across the country 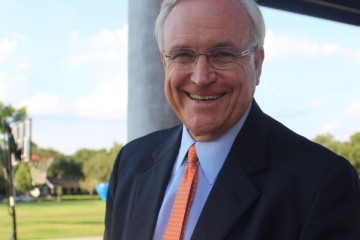