What? Luis Guzman’s “Puerto Ricans in Paris” didn’t even get nominated for an Oscar!

In what many are referring to #OscarsSoBlack in contrast to last year’s #OscarSoWhite protest, Latinos were once again almost invisible in this year’s Academy Awards. No Latinos were nominated for any roles, none of the nominated films had any Latino content as far as we can tell, and there weren’t even that many Latinos as presenters!

Besides Lin-Manuel Miranda’s (Puerto Rican) short rap performance introducing his nominated song, “How Far I’ll Go” from Moana, the only Latino presenters were actors Gael Garcia Bernal (born in Mexico), Javier Bardem (from Spain) and Salma Hayek (born in Mexico). Given this scarcity of Latinos, we should probably also be counting Lin-Manuel’s mom, psychologist Luz Town-Miranda, who accompanied him to the awards.

There was, in addition, the beautiful rendition of “How Far I’ll Go” by Auli’i Cravalho, who is from Hawaii and, like Bruno Mars, is part Puerto Rican. The audience was also moved by Gael Garcia Bernal’s comment that “As a Mexican, as a Latin-American, as a migrant worker, as a human being, I am against any form of wall.”

The welcome diversity of the Oscars this year in terms of the Black community was fueled by such quality films as “Moonlight,” “Fences,” and “Hidden Figures.” No comparable entry of Latino-focused films of this quality seemed to emerge this time around. To some this raises the issue of whether Latinos are being offered the right opportunities or vehicles in Hollywood. In 2017, it was still, sadly, #OscarsSinLatinos. 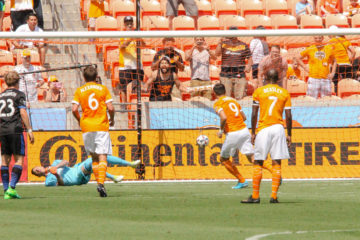