The Mustangs of Southern Methodist University looked to remain atop of the American Athletic Conference against in-state rival Houston Cougars at the Hofheinz Pavilion in Houston, TX.

Earlier in the season, Houston lost on the road in Dallas to Southern Methodist. The Cougars planned to even the series by defending their home court against a Mustangs team that’s ranks 19th in the nation.

“I have to give Houston a ton of credit- they were very sharp, especially on the offensive end,” SMU head coach Tim Jankich said. “They jumped out on us.”

The Mustangs were the first ones to draw first blood on a two-point, but the Cougars’ offense quickly took momentum by gaining an eight-point lead within the first five minutes of the first half.

Southern Methodist efforts to score and reduce the lead were dashed by Houston’s defense. Houston managed to keep them at bay while being able to continue to add more points on the scoreboard.

At one point, the Cougars managed to gain an 11-point lead against the Mustangs. Houston fans cheered at the thought of going to the break with a large lead.

Then the timer hit the six-minute mark.

Cougars fans began to lose their enthusiasm while SMU fans chanted “SMU!” as the Mustangs scored eight unanswered points to tie the game 26-26 with a minute left before the break.

Houston managed finish the first half by gaining a four-point lead over their rival.

“Give SMU credit. That is a good team,” Houston head coach Kelvin Sampson said. “They are ranked 19th, but they are better than that, which tells you how good we are too.”

Once the second half went underway, Houston tried to recreate the same momentum that earned them an 11-point lead in the previous half, but were unsuccessful with SMU having changed their game plan.

Houston’s fortunes didn’t seem to improve with the officials calling four straight fouls in a span of 46 seconds against them.

“It messes with kids’ psyches, whether you want it to or not,” Sampson said. “I think it affects everyone in the arena. Not just the players, but the fans too.”

The Mustangs seemed to have their number after gaining the lead on a three-point shot made by Ben Emelogu II. It seemed bleak when the Mustangs had a six-point (47-41) lead over the Cougars.

At minute 5:14, the Cougars were able rally back to tie the game 51-51. Their rally, however, wound up being short with the Mustangs capitalizing on Houston’s missed free throws.

“In games like this, little things are big things,” Sampson said. “Galen [Robinson] has really improved his free throw shooting. It’s unfortunate he did not have a good day today because that would have sustained us.”

The missed free throws allowed the Mustangs to take the game with a 76-66 win, breaking Houston’s five-game winning streak.

With the loss against Southern Methodist, Houston sits in the third seed of the AAC while SMU maintains its lead at top of the conference.

“We just have to keep staying mentally focused and tough,” Houston’s Damyean Dotson said. “Focus on the next game and see what we have to do. Get our game plan together, go, fight, and win.”

The Cougars close their season home series against UConn Huskies on Feb. 22. 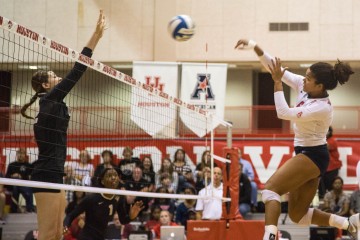