Lady Tigers leave it all on the floor

The TSU Lady Tigers met the Grambling State Lady Tigers in a championship version of the Tiger Paw classic on Saturday afternoon.

Grambling St. started the game off on an 8-3 run with the scoring from forward John’ea Thompson and guard Shakyla Hill. GSU did not give up the lead until TSU closed the gap between the teams to tie the game 35-35 at half time.

Texas Southern closed the gap in the second half with scoring from guard Joyce Kennerson and forward Breasia McElrath. TSU took advantage of a poor play from guard Chynna Ewing at the final minutes of the game to take the lead from Grambling.

With this win TSU earned their first trip to NCAA tournament for women’s basketball.

Jones and Tigers show why they are Number in the SWAC

Texas Southern Tigers took on the Alcorn State Braves for the SWAC Men’s Championship. Thanks to a win Friday from the Braves, the Tigers were already set for a NCAA Tournament spot. Saturday evenings game was to solidify the dominance in the conference.

From the opening tip center Marvin Jones showed why he was named SWAC defensive player of the year. He dominated the painted area with scoring and defense. He helped TSU with a 10-2 opening lead.

Alcorn St. was down but never out of the game with hard play in the paint by forward Reginal Johnson. Johnson showed how versatile his game was by making shots from the 3-point line. He had help from his teammate guard Denzel Dulin whose streaky shooting help Alcorn gain the lead by the middle of the second half.

Alcorn St. Johnson was top scorer in the game with 16 points on 6-13 shooting with 6 rebounds, also being named to the All-Tourney Team. Dulin chipped in 12 points on 5-11 shooting and 5 rebounds.

This will be TSU’s first NCAA Tournament appearance since 2015.

NCAA Football: Houston vs Rice; Battle of the Bayou Bucket 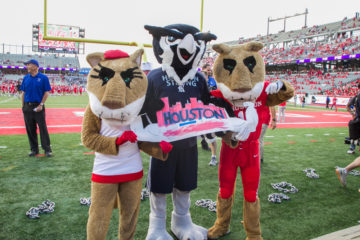