By Emily Slater and Gabrielle Moore

The sun set behind John Hernandez’s family on Friday as they addressed a small crowd of press set up across the street from the San Jacinto Memorial Funeral Home.

Family members spoke, in both Spanish and English, thanking media for their involvement. That’s because, without the media’s support, the case probably would not have moved as fast as it has.

“We don’t have words to show how grateful we are,” Martin Hernandez, John’s uncle. “Without the support of the media, it wouldn’t be possible to bring justice so that it doesn’t happen to others.”

What started out as an isolated case at a Denny’s, became another wakeful discussion about justice and peace across the nation. Media is an integral part of justice seeking. It harkens back to similar cases where medias, like social media, called for justice for other people of color such as  Trayvon Martin and Alton Sterling.

“It sets precedent,” he said.  “An indictment hadn’t happened this fast in Harris County ever. It’s due to community support, to the mobilization of the family, of the many people that came together.”

Hernandez passed away three days after being held down and strangled by Terry Thompson, with his wife, Harris County Sheriff deputy Chuana Thompson, assisting in the assault according to witnesses, on Sunday, May 28.

The Thompsons turned themselves on Thursday night, with bail set at $100,000 dollars each, which was paid early Friday morning by an anonymous benefactor.

The Thompsons will have their first appearance in court on June 14.

Jose Morales, a close family friend, said, when the family found out what happened to Hernandez, there was fear about where to go for help.

“We needed help, and I didn’t know where to go,” he said.  “I wasn’t going to go to the police department because they’re just going to put me behind bars just for going and telling them something. So I said, ‘Okay, what’s my next step? Media.’”

The first call Morales made was to KPRC-TV news. What followed were constant return calls from several other news outlets, even having “four different news channels in the hospital the day they disconnected [John Hernandez],” Morales said.

“News is news. People want to hear the news. Unfortunately, it was bad news,” Morales said. 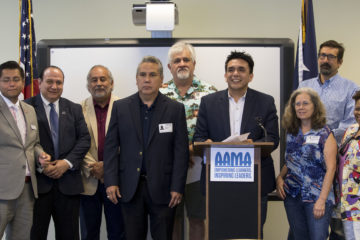