It’s been 3 years since Morbid Angel last visited Houston. The band was then on tour celebrating the 20th anniversary of the release of “Covenant,” an album many consider to be a death metal classic. This time, however, there is a new lineup. Steve Tucker made his return to the band in 2015 and this time the tone promised to be different. Fans outside the venue began to line up early, excitement building to see what one of the original death metal bands would bring them this Sunday night.

“It feels normal, it feels right,” says Tucker when asked how it feels to be back with Morbid Angel. The band parted ways with vocalist David Vincent in 2015. Dan Vadim Von (guitar) and Scott Fuller (drums) are also new members of Morbid Angel, leaving founder Trey Azagthoth as the sole remaining original member.

With the new lineup in place and new songs written, the band embarked on a tour in May, with its second-to-last stop in Houston at House Of Blues. Morbid Angel is joined on this tour by a diverse mix of supporting acts – blackened doom metal from Withered from Atlanta, GA, thrash metal by Revocation from Boston, MA, and brutal death metal by Suffocation from New York, NY. Desecrate The Faith, from Houston, was a late addition to what promised to be a powerful lineup.

Prior to the show, there was a lot of buzz from fans surrounding the Morbid Angel set list. Many on social media were not happy with the fact that there were no David Vincent-era songs being played on the set. This was despite the announcement by the band that no songs from that era would be played.

“If people want to [complain] about not hearing the same song for the 10,000th time, that’s fine… or they can get to hear some other songs they never got to hear live,” is Tucker’s response to the buzz, although he admits he was not aware of the complaining. Some fans, however, were onboard with the decision by the band.

“The David Vincent songs are definitely some classics, but the Steve Tucker stuff is really some of my favorite from [Morbid Angel],” says Aleq Sheets, frontman for local Houston death metal band Sculpting Atrocity.

There were also some questions regarding the fact that tickets to show were being given away with a purchase by at least 2 Houston-area independent record stores. Many of the fans in attendance were recipients of these free tickets. Many were wondering why tickets were being given away, but, most were just happy they could experience Morbid Angel live, for some again and for others the very first time.

As for Desecrate The Faith, the local band on the bill, they were definitely excited to share the stage with Morbid Angel, especially as it was their first time ever getting to play at House Of Blues.

“We had a blast. It was great to be on that stage with all those killer bands and to play under that giant Morbid Angel banner was awesome,” says guitarist Tyler Shiery.

Morbid Angel heads to Europe to play several festival and one-off show dates before heading back into the studio to complete work on their as-yet-untitled album. Steve projects the album to be released prior to the end of 2017. 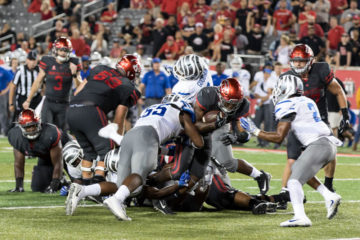