Harris County Sheriff’s Office investigators are seeking the public’s help in identifying a man suspected of slashing a woman with a knife while yelling anti-Muslim slurs at her.

The victim, a 25-year-old woman, told investigators that she was driving home from her job at North Cypress Medical Center, 21214 Northwest Freeway, at 1:30 a.m. on Thursday and was driving south on Huffmeister Road.

A northbound red SUV swerved into the victim’s lane of traffic, narrowly missing her.

The victim is white and wears a hijab. She then stopped in a parking lot on Huffmeister Road to compose herself.

The driver of the red SUV made a u-turn and also pulled into the parking lot, according to the woman. He then exited the vehicle wielding a knife and shouting ethnic slurs at the woman.

The victim tried to get back in her vehicle, but the passenger side door was locked. At that point the attacker began waving a knife in the victim’s face and then hit her with its handle on her shoulder and arms.

She used her arm to shield herself from the attack and sustained a laceration. A passenger in the red SUV then led the driver back into the vehicle and the two men drove away. The victim drove herself back to the North Cypress Medical Center emergency room for treatment.

The Houston chapter of the Council on American-Islamic Relations (CAIR-Houston) today offered a $5,000 reward for information leading to the arrest and conviction of the attacker. 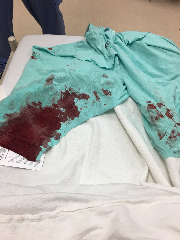 “We hope that anyone who has information about this potentially-deadly and apparently bias-motivated attack will immediately contact law enforcement authorities,” said CAIR-Houston Executive Director Mustafaa Carroll.

The men are described as follows.

Suspect 1 is a white male, 5 feet 8 inches tall, about 175 pounds with a thin build and dark hair. He was wearing a white t-shirt and dark colored pants.

Suspect 2 is a white male, unknown height and hair color, with a thin build. He was wearing a white t-shirt and dark colored pants.

Both men were described as speaking with a thick country accent.

Houston we have a Jumpman

Tale of a transfer