As a senior in college, I was looking for a good workout. At 220 pounds, I started my regimen with a physical trainer. Little did I know, that began the shift in lifestyle that would pave the way for my future in combat sports.  Boxing and MMA changed my body and mind.

As female athletes, hurdles come in various forms from the negative comments, discouragement, body image issues and other frustrations. I was able to sit down with well-known photographer, graphic designer and Brazilian Jiu Jitsu practitioner, Hosanna Rull of iRull Photography and Design to get her take on women in combat sports. 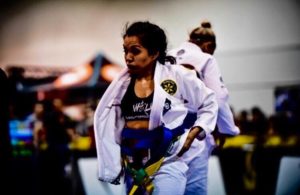 Jasmine Crawford: So I take it Jiu Jitsu is your favorite out of them all?

Hosanna Rull:  It’s not so much my favorite. It’s just easier for me to be competitive with my size, weight class and age. If I pick any other sport, it would take more time to focus on. With MMA and boxing, a lot of fights would be dropping off. I’m in no position to really sacrifice a lot of my time. Brazilian Jiu Jitsu just became the perfect sport for me to be competitive in and also work in.

JC: So if you didn’t have to sacrifice, what would you choose?

HR: In a perfect world, I would definitely be in boxing. I have been told from matchmakers that because of my size I would probably compete at 100 or 105 lbs.

JC: So what inspired your love of boxing?

HR: My dad was a boxer once upon a time. I just grew up watching fights. He always watched the fights at my uncle’s house, so whenever he would go, he would take me to play with my cousin. I ended up not playing and watched the fight with my dad.

HR: One of my biggest idols is Frida Kahlo. She’s just a badass woman who wasn’t supposed to be a badass woman in her time. As women in the martial arts industry, we can be stubborn with our bodies. When we’re in pain, when we’re hurt, it doesn’t matter. We still show up to training, a fight, to compete or whatever. Frida was not different. She suffered. She couldn’t walk very well, and she went to one of her shows in an ambulance. She didn’t want to miss it. I think that, in itself, shows how a woman like us was in her day. 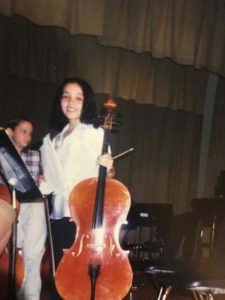 JC: You are an artist. How is it seeing the two contrasts between being an artist as a musician, an artist behind the camera and also with your body in combat sports?

HR: It wasn’t until I was probably a blue belt in jiu jitsu that I realized how much art has taken over my life. It was really cool at that moment to see the art of boxing, the art of jiu jitsu, the art on my computer with graphic designing, playing the cello – all that came together throughout my life. It really took me a while to realize that. What’s in you comes out. When you see me in Brazilian Jiu Jitsu, I can be a little aggressive. I think there’s a lot in me in every single art that I do.

JC: So what makes you so aggressive?

HR: Maybe, the fact that I grew up seeing fighting as entertainment. It was nothing negative. I saw it as something fun to do with my dad. We didn’t have the best relationship, but at that moment, we were getting along. When we were watching the fights everything was great. We weren’t arguing.  We were watching the fight. That was the only time we could really do something together. I think seeing, as a little girl, the praise that boxers were given kept me wanting to do it.

JC: How do you feel about being a woman in combat sports?

HR: Sometimes it can get exhausting. Having to always… maybe it’s just in my head.  Like, I’ve had to prove I belong. It can get mentally exhausting. Whatever you can imagine, I’ve dealt with.

I’ve visited another gym.  The instructor thought during the roll he could accidentally cop a feel. I’ve dealt with elders who want a poster design, and then I see it’s already designed by a guy. If you go ringside to a boxing show, I’m usually the only girl there. Photography is mostly male as well. I always have to prove my spot in the cage. It’s definitely a lot of, ‘I can do this’.  Maybe, that’s where my aggressiveness and toughness comes from. I had to prove to my dad that I could do it, because he wasn’t the nicest guy either. He would tell me if I fought I would lose. I would have to prove to him that I wouldn’t.  I moved to Houston alone. I was still a teenager, and he would say that I would come back. So, I think my whole life in the combat sports world, most of my effort was proving that I belonged there.

HR: I already know I do. I know my skill level. I have the skill to be there. It’s just there for them to see. It’s a male dominated world, but even with them all being males, it’s still very cutthroat.  For a female to show up, it’s always having that feeling to work harder to prove yourself. But, I think I’m at a point where I’ve kind of already done that

JC: I want to talk to you about weight cutting and how it effects women’s bodies and bodies in general. For example my body, I’m not a small girl, I have a sort of Venus Williams’ body where it’s long, muscular and some would think that’s not feminine. And you have the scrutiny of that. Then after a fight camp, you don’t have that body anymore because it’s not realistic to have that type of body on a consistent basis because it’s not healthy.

JC: I know from personal experiences where I think I’m huge, and I’m not.  How does that make you feel? When you go from looking like this one person that’s your fight weight, then you go back to your normal walk-around weight which is more healthy?

HR: I know. I’ve had people tell me I look the best when I’m at my fight weight.  I don’t think that’s true. I think I’m too tiny and unrealistic. But when you have a number of people saying you look so great, you look this, you look that, it plays in your mind. You automatically think you look unattractive. Although we’re tough, at the end of the day, we’re still female. We’re still women. We still have female emotions.  If someone tells us this you is better than that you and this you is not a healthy you, then you go through a wrestling match in your head about how to identify yourself physically.

This interview has been edited for length and clarity.  Look for the second part of The Venture’s interview with Hosanna Rull next Wednesday. 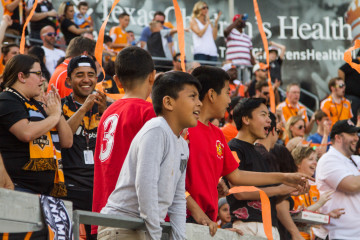