Hazel takes deep breaths as her husband stalks towards her, expression furious and teeth set on edge. He grabs at her arms, jostling her in place. She struggles against him, but he forces her down onto the kitchen counter as the half-finished soup boils. This sexual assault is common in her home.

Because Hazel, an immigrant from Pakistan for five years, is a sexual abuse victim, her name has been altered. She is also now a divorcee of her sexual abuser.

This situation is not uncommon for women, and, in particular, immigrant women. According to the National Sexual Violence Resource Center, one in five women is raped at some point in her life. According to the Mississippi Coalition Against Domestic Violence, immigrant women report exceptionally high rates of sexual assault during their first two years in the United States.

Despite the frequency of the crime, there are various barriers immigrant women face when having to report sexual assault.

Hazel’s husband would rape her on a daily basis, sometimes even five times a day. She did not know what he did for a living, who his friends were and where he went. She could not leave the house or talk to anybody in the neighborhood.

In Hazel’s culture, women learn to agree to what the husband does or says. She had been a working woman prior to her marriage but gave up that life to live with her husband. The public’s belief that someone is only assaulted by strangers is a social stigma she has had to deal with.

“When we think of someone who is a victim of a robbery or homicide, the amount of empathy that goes towards that person is non-questionable. But sexual violence survivors experience victim-blaming,” said Khare.

Social stigmas women face include believing that if a person does not verbally express no, it is not rape; or that only vaginal penetration is sexual assault. In reality, women often do not say no in fear of what will happen to them. Sexual assault is not only penetration but any unwanted sexual contact, including molestation.

In the long run, Khare believes that breaking down the cultural taboos surrounding immigrant women and sexual assault would be most beneficial. According to Khare, this is an action that requires no money or government approval. It starts in the education families provide at home.

“We are a culture where victim-blaming is prevalent. This feeds into sexual violence leading to long-lasting health effects,” said Khare. “We have to do a better job in validating women’s experiences. The real work is not with the victims, but with the bystanders.”

Hazel, as an immigrant mother, faces concerns that would not plague the average American woman when reporting sexual assault.

Immigrant women often have additional factors that citizens do not have to consider when reporting sexual assault. These include deportation and its implication on both the mother’s futures and their children’s future.

Undocumented immigrants who report sexual assault run the risk of being deported. ICE negotiates “jail agreements” with local police, where officers can question jailed individuals about their immigration status. This can lead to them preparing documents to charge them for immigration violations, and continuing the detention of persons thought to be subject to deportation

Although Harris County is no longer active in the 287(g) program since February 2018, a program that allows state or local law enforcement to enter into a partnership with ICE in order to receive delegated authority for immigration enforcement, there is little reduction in the number of undocumented immigrants that are arrested and reported.

Revenge deportations are also a reality immigrant women face, as their abusive spouses can call ICE or local law enforcement on them. Both in counties participating in the 287(g) program and not, undocumented immigrants face arrest. This can destroy hopes of a better life both for the woman and her possible children.

Claudia Yoli, Director of Student Outreach and Organization in Deeds Not Words, a non-profit organization founded by Wendy David that galvanizes the power of young women, states that organizations like ICE and Border Patrol terrorize the communities. There are reports of sexual assault occurring within ICE in the past year.

Khare also adds that there are many barriers for non-profits. They often do not have sufficient funding thus cannot help the community as much as they wish.

However, in the Houston area, the Harris County District Attorney Office has partnerships with certain organizations to help the community at large. One of these organizations is Daya, where there are confidential hotlines women can use to report sexual assault. This is done in hopes to minimize the barriers between law enforcement and victims.

There are also be legal pathways that protect women against sexual violence. Organizations such as the Tahrir Justice Center and Katine & Nechman Legal Office offer help for immigrant women wanting to escape sexual violence.

Hazel, despite her trauma, continues to fight for other women who may be or have been in the same situation as her. “I want to speak up so that others can have hope of a new world out there,” said Hazel. “This is not permanent. Staying quiet only gives them the courage to do the worst.” 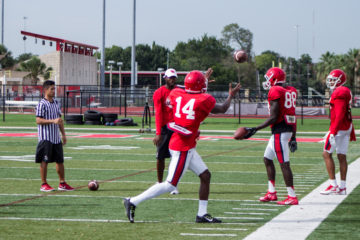