On a Saturday night, in the dim lit Dirt Bar, you can find Chris Amerson clowning around a large group of adults.

Amerson, or Skabz the clown, won’t wear a big red nose, but he will slip into a pair of scuffed stripped clown shoes before every act.

“I like to get wasted before a show – not too wasted though, ‘cause then juggling gets sort of difficult,” said Amerson.

Amerson is part of a sub culture of clowns that mostly caters to adults; a group of professionals that find themselves alienated from the rest of the industry.   Amerson claims it’s been gaining ground, but the World Clown Association, the biggest clown association in the world, claims that the clown profession is holding steady after a period of decline.

The WCA has thousands of members in over 34 countries around the world but has a hard time accepting or representing clowns like Amerson.

Most clowns will stick to a strict set of guidelines, or “clown commandments” when taking on a job. The guidelines are an unspoken agreement of professional conduct between the clown and the client, but that’s just not the case with Amerson.

For years, Amerson has been captivating audiences by breathing fire, getting naked, or being hosed down with a fire extinguisher.

Long legged tarantulas, hissing cockroaches, and even crickets are among the types of bugs that are part of Ameron’s act.

During the fall, you can also find him drenched in red dyed corn syrup and working weekends in Halloween shows or haunted houses.

Amerson’s interest in clowns began in high school when he attended a life changing rock concert – Oz fest of ’97. There, he met a clown that went by the name of Reverend B. Dangerous; a clown whose act revolves around dangerous stunts.

“The first time I met him, he said don’t try this at home kids and hammered a nail into his nose. I told him you’re not my father and I went home and hammered a Q-tip into my nose anyway”, chuckled Amerson.

Amerson began working part time as a clown in 2003 and quickly lost interest in entertaining kids. His shift into working with adults can be pinpointed to one botched children’s party.

“I brought hissing cockroaches into a children party and one of the kids starts screaming and yells there’s a bomb in the school and the bugs are going to eat us and then ran and all the other kids followed him, I just stood there and didn’t know what to do.” Said Amerson, “Kids are the harshest critics.”

Amerson has seen more business recently. He claims that different movie portrayals and the clown scare of 2016 helped spike interest in his industry.

The 2017 horror movie “IT” is an adaptation of a book written by Stephen King. “IT” is centered around a homicidal and cannibalistic clown who haunts several children in a small town in Maine.

In 2016, videos of clowns scaring civilians throughout the United States flooded social media and soon swept the news. Many professionals in the clown industry have found the clown scare impacts to be lasting.

“For what I do, I’m one of the best clowns in Houston – if not the best”, Amerson said, “…movies like IT definitely helped.”

Coulrophobia or the fear of clowns, has been around for decades. Many clowns point their fingers back at horror movies that portray clowns negatively for their woes.

Roly is not the biggest fan of the movie “IT” due to its effect on parents hiring him for jobs or gigs. He claims parents are uncertain about hiring him.

“I’ve been clowning for kids for the last thirty years”, Roly said.

Roly wears a big red nose, a striped shirt and always has a silly colored hat. His act is more traditional: He juggles, dances, and rides a tricycle.

“I’ve always preferred to work with children. They are less demanding,” Roly muttered.

Roly’s interest in becoming a clown began when he saw a professional clown at the Johnny Carson show juggle bowling pins while riding a bicycle.

“I’ve been doing this for a long time and now I’m doing less. I’d say horror movies like IT have helped in the decline of gigs” said Gutierrez.

Roly will occasionally take a job as a clown but not nearly as often as he used to.

Not seen as a real clown.

Clint, a Houston resident, claims that he has been to every haunted house featuring clowns in the area. He recently stopped by the haunted house 13th Floor to see their new horror clown attraction.

“Almost every haunted house you go to nowadays has clowns, they’re creepy but not all that scary”, said Clint.

In the last few years, Clint has driven as far as Waco just to get a good scare.

“I do see clowns that work at haunted houses as clowns, they are still entertaining people”, said Clint.

Billy Armstrong, a worker at 13th Floor, said “I think the clowns here are pretty funny, they are an oxymoron. Clowns are supposed to make people laugh and smile but are now entertaining through fear.”

Not everyone agrees with Amerson’s modern take on clowning.

The WCA’s official stance on clowns like Amerson is that they are not clowns, but instead, people playing fantasy characters from horror movies.

They have made it clear that they will not associate with people like Amerson who represent a new type of “copycat” clowns.

Andrew Davis, the WCA president, stood by the organization’s stance on the “copycat clowns.”

“I haven’t even watched IT, I don’t really watch horror films,” said Davis, “I watch cartoons and movies that make me laugh and smile.”

In a press release, the WCA states that those who aimed at causing fear where not considered to be real clowns by their organization.

According to a WCA code of conduct statement, a clown “…will present quality, friendly-looking, professional makeup and costuming and will maintain his/her clown character while in public view.”

“I’d consider them more of evil Halloween fantasy characters than clowns”, said Roly, “These people are hurting the professionals.”

The Cheerful Clown Association of Houston is a one-in-all stop for professional clowns and has been for decades. Established in 1982, the Cheerful Clown has been training clowns on tricks, etiquette and even provides volunteer and job opportunities.

“Movies like IT and the 2016 clown scare have definitely made it harder for us to obtain business, but we remind parents that we are about making children smile – not cry,” said Pam, a recruiter at the association.

“During the fall, we tend to pick up on business so I hope it will different” said Pam.

Amerson is aware of the criticism he receives from clown associations and claims that their religious tendencies and strict regulations keep them from including clowns like him.

“If I’m not a real clown in their eyes, that’s fine. I still bring fun and joy to the crowds that love me” said Amerson.

For the next month, Amerson will stay busy scaring kids at several haunted houses. You can find him every weekend at Creepy Hollow haunted house.

But Amerson is always expanding and looking for new and creative ways to add to his act. His newest act: burlesque.

“This fall, we will be bringing back Fixation. Should be fun,” said Amerson.

Fixation is an adult variety show that features burlesque, fire, magic and kink. He often collaborates with Emily Snow, a friend and a worker in the burlesque industry.

Fixation is expected to debut sometime this November. 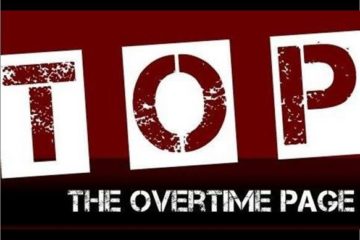