In his first year as head coach, Dana Holgorsen led the Houston Cougars to a 4-8 season which was their worst record since 2012. The four wins are the fewest by a first year UH coach in almost 20 years. Even with the team’s disappointing season, Holgorsen is set to make $3.8 million, an increase of $100,000, in 2020 as part of his five-year contract worth $20 million.

In 2019, Holgorsen’s salary made him the 35th highest paid coach in college football ahead of Iowa State’s Matt Campbell ($3.6 million) and behind Virginia’s Bronco Mendenhall ($3.7 million).

Being a head coach comes with more perks besides a substantial salary.

A courtesy car is provided for Holgorsen, which his spouse is also able to use. According to his contract, UH also pays for gas, insurance and oil changes.

Travel expenses are reimbursed for Holgorsen which also includes his immediate family.

Reimbursements for temporary housing, moving expenses and family flights for house hunting in Houston were limited to $22,500.

Holgorsen’s contract is laden with performance incentives such as an invitation to a Power Five conference and GPA targets for student-athletes. Coach Holgorsen can earn an extra:

Holgorsen is provided with a coaching staff budget which cannot exceed $4.5 million annually.  This includes full-time assistant coaches, operations staff, analytics personnel and other “ off the field“ staff.

Certified athletic trainers and the Department of Athletics Performance Nutritionist are not included in the budget.

Coach Holgorsen is not allowed to receive other forms of football related compensation without prior approval from UH. This includes television or radio programs, endorsements or consultation contracts, income from speeches, appearances or written materials.

If Holgorsen is interested or presented with any other NCAA or NFL coaching position, Coach Holgorsen must notify the AD before any negotiations happen.

Coach Holgorsen’s contract is more than double the compensation of last Cougar head coach. Major Applewhite had a five-year $1.5 million per year contract, which included a base salary of $650,000.

“ I would probably cut it in half,” UH student Alexander Hernandez said. “ The same mistakes that I saw in the first game is what I saw in the last game. There’s pretty much no improvement and that tells you the story.”

Photo by University of Houston Athletics 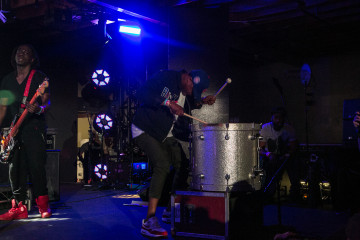