Despite the health concerns regarding Covid-19 , the UFC is officially set to return on May 9th starting with their UFC 249 card. On Friday, the card was officially announced as well as two other events that are set to take place the same week.

The events are scheduled to take place in Jacksonville, Florida with no fans in attendance and limited staff. The headliner includes a matchup between Tony Ferguson and Justin Gaethje for the Interim lightweight title while the co-main event will see bantamweight champion Henry Cejudo defend his title against the returning Dominick Cruz.

Tony Ferguson (25-3) will look to win the interim title for the second time after his original title fight against Khabib Nurmagomedov was cancelled for the fifth time in the last five years. Ferguson has not lost since 2012 with victories against Rafael Dos Anjos and Anthony Pettis.

Justin Gaethje (21-2) is known as “The Highlight” as he has 18 knockout victories over his career. His knockout wins have come against fighters such as Edson Barboza and Donald Cerrone. Gaethje is aiming to win his first UFC title against one of the best in Ferguson.

Henry Cejudo (15-2) refers to himself as “Triple C”. He has won an olympic gold medal as well as the flyweight and bantamweight titles. Cejudo has impressive victories against Demetrious Johnson and T.J. Dillashaw. He is not afraid to be vocal on social media calling himself the greatest of all time and looks to add to his resume in May.

Dominick Cruz (22-2) is returning to the octagon after a three year hiatus. Cruz is an MMA legend and is best known for his rivalry against UFC Hall of Famer Urijah Faber. Recurring injuries has kept the two-time bantamweight champion sidelined for a course of his career and his last bout resulted in losing the title against Cody Garbrandt but Cruz looks to bounce back and reclaim the title next month against Cejudo.

Photo by the UFC 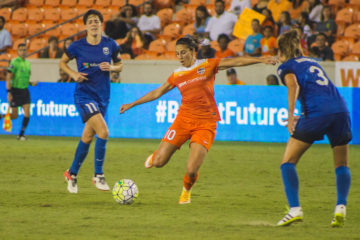