In the back of a University of Houston undergraduate classroom, there sat Raymond Ruiz with his eyes on his engineering professor but his thoughts elsewhere.

As distractions started to emerge into his life, Ruiz was in a state of confusion and like many college students, he was unsure of how to move forward in the right direction.

In 2008, Ruiz founded El Gato Media Network: the only non-profit organization in the country dedicated to the success of Hispanic college students in journalism and multimedia. In the last 12 years, over 150 students have joined the organization and 90% of active members have made it into the media industry. According to the American Society of Newspaper Editors, Hispanics comprised about 7% of the overall workforce in the media industry in 2019.

Distractions on things such as entertainment and car races consumed Ruiz’s life to the point where he was suspended from UH due to a low GPA. It served as a wake-up call. Focusing on community service and helping others would lead to a life turnaround.

“It was very frustrating because I was just trying to figure out all of that on my own,” Ruiz said.”It was very much a sense of frustration and failure.”

With his new perspective on life, Ruiz was committed to giving back to the community. Despite never being in an organization before he came across a sign that compelled him to join LULAC: the largest Hispanic organization in the U.S focused on civil rights for Hispanics.  During his tenure, Ruiz developed a deep passion for community service and rose to vice-president.

Ruiz’s time in LULAC served as a stepping stone for EGMN as he was determined to create an organization that provided mentorship that he did not receive in college. His goal was to provide struggling students with hands-on experience that would lead to success in media and become role models for the community.

“The local universities don’t have the capacity to help these students in the way they need to be helped,” Ruiz said.“It’s really hard to navigate all of that as a student who doesn’t know about the industry.”

According to a study by Excelencia in Education, nearly half of Latinos were the first in their family to attend college, family income is significantly lower than most ethnic groups and Latino adults have lower degree attainment than non-Hispanic white adults.

University of Houston graduate Viridiana Fernandez worked closely with Ruiz for the past two years as the student president for EGMN. She has interned at multiple media outlets and earned numerous scholarships, but even she has experienced uncertainty during her academic career.

“My parents do not know English, I’m first-generation and the oldest,” Fernandez said.”I was super lost and didn’t know what direction to take my life.”

Collaboration is one of Ruiz’s core values. During their freshman year at UH, Norma Salcedo and Edgar Veliz-Ramirez worked with Ruiz to launch EGMN off the ground. Both are now established professionals and have watched the organization evolve for the past 12 years.

HAHMP president and co-founder of Goodspero Nelson Vanegas explained how Ruiz has contributed resources to aspiring media students that are beneficial to their growth while familiarizing them with the professional world.

“He can take the experiences that a professional might be going through, package them up and present them in a way, and even create an environment where students can ease into…learning different parts of the industry,” Vanegas said. “An environment that Ray is able to create that’s conducive of great ideas and growth.”

Despite early distractions, Ruiz found a new career path in which he returned to UH and graduated with two Master’s degrees in Education and Business Administration. 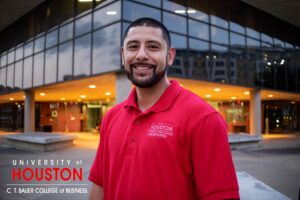 He still has a deep passion for community service and continues to use his experiences as a struggling student to provide others with guidance during the path to their career.

“My (former) students now are being invited to media career fairs or to talk at schools so that is very rewarding,” Ruiz said. “Regardless of how the sacrifices of volunteering impact me individually, seeing the impact on the community has made me want to keep on helping every year.” 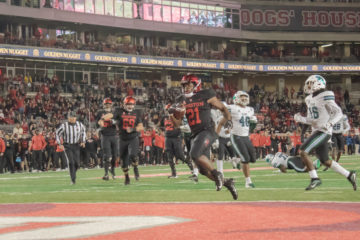