The University of Houston is scheduled to have the upcoming 2020 football season at TDECU stadium this fall, despite the coronavirus pandemic which has already shut down numerous sports conferences across the country.

COVID-19 has taken a toll on college sports. In March, the NCAA was forced to cancel winter and spring championships while in recent weeks, several conferences such as the Big Ten and Pac-12 have chosen to postpone their fall football season due to risk concerns. Other conferences have decided to play the season with established guidelines, enhanced protocols, and reduced schedules.

UH is a member of the American Athletic Conference which announced plans to proceed with fall sports. The AAC has collaborated with their medical advisory group, which includes UH football team physician Dr. Andrew Li-Yung Hing, to implement a safety plan that includes increased sanitization, social distancing, and testing.

“The health and safety of our student-athletes is our top priority as we face the challenges of the current global pandemic,” AAC commissioner Mike Aresco said.

While UH plans to follow the guidelines established by the AAC, the medical advisory group left discretion for nonconference games up to the individual schools provided the agreed safety protocols are followed. UH has elected to play two non-conference games – BYU and North Texas.

For home games at TDECU, stadium capacity will be reduced to 25%. The limited fan attendance will be a financial blow to the athletic department as football brings in the most revenue – $4.2 million in 2016.

As UH administrators were making plans to continue the season, players had mixed feelings.

Student-athletes have been vocal on social media using the hashtag #WeWantToPlay to advocate for a safe return to football. UH receiver Marquez Stevenson, who led the team in receiving yards in 2019, was among those supporting a return to the field.

UH lineman Sedrick Williams made the decision to opt-out of the incoming Cougar season citing health concerns after being diagnosed with COVID-19.

Campus leaders believe the players should have a voice in the decision to play.

“If student-athletes feel like their wellness is being prioritized they can choose to play but if not, it is in the best interest of everyone to cancel the season and take one for the team,” she said.

Since UH is a public school, the university president has the final say on whether games are played or not. Messages were left to UH president Renu Khator’s office for comment but were forwarded to the athletic department.

While most UH students are doing distance learning through September to reduce the risk of COVID-19, football players are being held to the safety guidelines of the AAC.

When reporting to practice, student-athletes were required to sign an acknowledgment of risk.  They must also wear a mask at all times and submit to testing as prescribed by UH team physicians.

In addition to constant cleaning and sanitization, staff placed social distancing markers throughout the various facilities used by players.

There is an on-site sports medicine representative that assists players with self-assessments along with daily temperature checks.

COVID precautions are not regulated to just players.

Designated gates will be accessible for fans while merchandise and concessions will include cashless options.

TDECU Stadium will offer a game day experience with enhanced safety protocols. Fans will be required to wear face coverings at all times throughout each game while ticketing will be handled digitally.

The Cougars are scheduled to begin the season on the road against the Memphis Tigers on Sept.18. Their original opener against Rice was postponed while the second against Washington State was canceled due to COVID-19 concerns.

UH alumnus Pete Mayes believes it’s a bad idea to move forward with the fall season during a global pandemic.

”I’m a huge advocate for game-day attendance, but I’m also a bigger advocate of using common sense, and going into a public stadium with fans who will be drinking and having different ideas on wearing masks is just risky all the way around,” Mayes said. “So if it were up to me, I’d cancel the season until spring.” 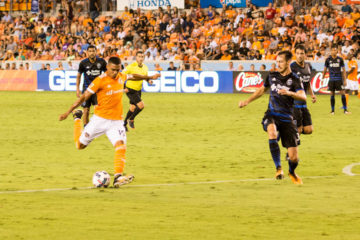