It was April 2020 when Jeremiah Gallegos was awakened by a tingling sensation down his body. While brushing his teeth, he noticed something off.

Gallegos realized that the right side of his face was droopy as water was streaming down the side of his mouth.

A trip to the emergency room revealed that Gallegos experienced an episode of Bell’s Palsy. The 20-year announcing veteran was now faced with uncertainty in an industry where an energetic voice and looks are valuable.

“I had the scare of my life,” Gallegos said. “When that moment happened, I didn’t know what to think.”

Bell’s Palsy is a result of damage to the facial nerve (7th cranial nerve) and there is no known cure. The condition is not deemed permanent but in some rare cases, it does not go away.

“It was eye-opening for me,” Gallegos said. “What if I don’t recover fully from this… I didn’t know.”

The thought of not announcing again sat on the back of Gallegos’ mind but after 20 years of constantly grinding for opportunities and kicking down the door to success, he was determined to return.

Gallegos’ love for announcing began at an early age. As a pastor’s son, Gallegos would use the church microphone to emulate legendary WWE announcer, Howard Finkel.

He began to showcase his talent during middle school basketball games as a young student.

He took advantage of an opportunity to be a guest kid announcer for the Houston Rockets at the Compaq Center which opened his mind to an actual career in announcing.

Eventually, Gallegos made the transition to the college level.

He would go on to spend 17 seasons with the University of Houston basketball game and Houston Rockets before finding his way to the Houston Dynamo.

He also ventured into the boxing scene by starting at the amateur level with USA Boxing. He began to move up the ranks and found himself as a professional ring announcer for DAZN.

“The whole pageantry when it comes to [announcing] in front of a small crowd or big crowd is all same to me because it’s special,” Gallegos said. “It’s a unique opportunity every time I step behind the microphone.”

The timing of Gallegos’s Bell’s Palsy diagnosis came during the beginning stages of Covid-19. Sports leagues across the globe shut their doors due to the potential spread of the disease.

As a public address announcer, Gallegos took a financial hit by Covid. The professional gigs that he relied heavily on for his income became non-existent. Gallegos had to improvise. In order to make ends meet, he found a temporary job with H-E-B and offered online birthday shoutouts using his announcing skills.

“That helped me out with my income to pay the bills,” Gallegos said. “It was all survival mode at that point in time.”

Friend and broadcaster Justin Simmons discussed the hard-working mindset Gallegos has produced inside the ring and out.

He (Jeremiah) is like this ball of energy,” Simmons said. “He’s always willing to give his best effort and the guy doesn’t quit man.”

Gallegos’ recovery efforts paid off as he was able to return in front of the microphone with a new outlook on life.

“Bells Palsy opened my eyes,” Gallegos said.” It seems like we take our smiles, our laughter, and the way we talk for granted. Now whenever I’m able to do those things, I appreciate [them].” 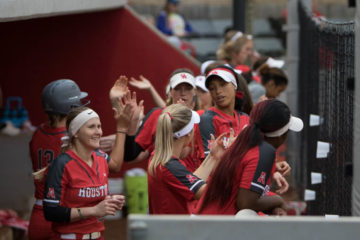